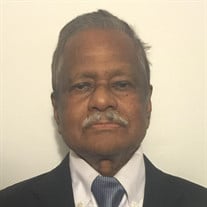 Dr. Appukuttan Sundaram, 78, Celina, passed away at Kettering Medical Center, Kettering, Ohio, on November 23, 2016 at 2:36 am. He was born on January 13, 1938 in Vadavunnur, Kerala, India. He married Prabhalochana “Prabha” (Velunni) Sundaram and she preceded him in death on November 2, 2015. Other survivors include: two sons, Subodhkumar (Nausheen) Sundaram, VA, Pramodh Sundaram, OH; a daughter, Ranjini “Subi” Sundaram, MO; granddaughter, Laila Iqbal-Sundaram, VA; and several brothers and sisters and their families. Preceded in death by his parents, Kakkunni Appukuttan and Ponnan Thangamma. He graduated from Stanley Medical College in Chennai, Tamil Nadu, India, then finished his Otolaryngology Residency at Rhode Island Hospital/Brown University. Appukuttan was a dedicated and caring husband, father, and surgeon. His practice spanned three countries including India, Zambia, and the US during which he was a practicing surgeon, administrator and professor. Ultimately he chose to make his home in Ohio, serving the communities of Celina, Lima, St. Marys, Coldwater and Van Wert. He was a member of The Hindu Temple of Dayton, Indian National Congress, American Kerala Medical Graduates (AKMG), Reach Out Foundation, American Academy of Otolaryngology-Head and Neck Surgery (AAO-HNS), American Association of Physicians (AAPI), and India Club. Funeral services will begin at 4:00 pm on Saturday, November, 26 2016 in the Cisco Funeral Home, where the family will receive friends from 2 – 4 pm. Cremation will follow at Tri-County Crematory, Lima, OH. Please leave condolences to the family @ www.ciscofuneralhome.com

The family of Dr. Appukuttan Sundaram created this Life Tributes page to make it easy to share your memories.

Send flowers to the Sundaram family.