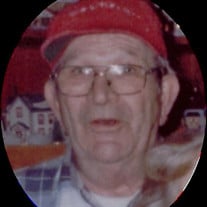 Bennett “Ben” A. Schmidt, age 83, of Mendon, Ohio, passed away on Monday, December 2, 2019, at 9:06 PM, at the Laurels of Shane Hill in Rockford. He was born on April 14, 1936 in St. Joe, Ohio to the late Louis and Marie (Roessner) Schmidt. Surviving Ben are his children Roger (Sherry) Schmidt, Columbus, Ohio; Lisa (Mark) Jones, Mt. Vernon, Ohio; Kevin (Heather) Schmidt, Celina; Michael Schmidt and Lori (Brad Weyandt) Huffman, Mendon; four stepchildren, Diana (Robert) Fields, Portland, Indiana; Betty (Randy Petit) Lawrence, Celina; Steven (Gilda) Teeple, Valparaiso, Indiana; and Mark (Evelyn) Teeple; Angola, Indiana; his first wife, Patricia (Heitkamp) Schmidt, Canal Winchester, Ohio; and numerous grandchildren and great grandchildren. He was preceded in death by his second wife, Elizabeth “Betty” (Grogg) Schmidt; and three stepsons, Roger Teeple, Larry Teeple and Bruce Teeple. Betty and Ben are once again reunited on the next leg of their journey, and she was one of the few people who could keep him in line. Coming from a large family, Ben shared many years celebrating life with his eleven brothers and sisters, Louis “Joe” Schmidt (d), Dan Schmidt, Julienne Rehmert, Raymond “Bill” Schmidt (d), Father Les Schmidt, Rose Darby (d), Evan Schmidt, Margaret Rammel, Karen Steinbrunner, Mary Thomas, and Arlene Weaver. Family reunions on the 4th of July at the family farm were always a high-point. Ben was a graduate of West Union (Ohio) High School in 1954. He proudly served his country in the United States Army. He retired from Reynolds and Reynolds in Celina after 28 years of service as a press operator. He was a member of Immaculate Conception Church in Celina. Through the years, Ben enjoyed socializing with friends and family, bowling, fishing, camping, gardening, and especially playing cards. In his later years with Betty, he enjoyed winters in Florida and summer weekends on the lakes around Angola. His favorite comeback line was “Hey, whatever”. If you heard that, you were probably saying something he didn’t agree with. He appreciated hard work and pitched in to help friend and family without being asked twice. A gathering of family and friends will take place at Cisco Funeral Home, Celina on Friday, December 13, 2019 from 3:00 pm – 7:00 pm. Prior to the gathering, a rosary will be said at 2:30. Immediately following the gathering, Military Rites will be conducted by members of Celina American Legion Post #210 and VFW Post #5713. Memorial Mass of Christian Burial and celebration of his life will begin at 10:00 am on Saturday morning, December 14, 2019, in the St. Joseph Catholic Church, Fort Recovery, Ohio, with Fr. Ned Brown and Rev. Les Schmidt officiating. Burial will be held at a later date. Memorial contributions may be made to State of the Heart Hospice, 230 W. Main St., Coldwater, Ohio 45828. We wish to greatly thank the staff at Coldwater Hospital, State of the Heart Hospice and the Laurels of Shane Hill for their care and compassion. Please leave condolences to the family at www.ciscofuneralhome.com

The family of Bennett A. Schmidt created this Life Tributes page to make it easy to share your memories.

Send flowers to the Schmidt family.