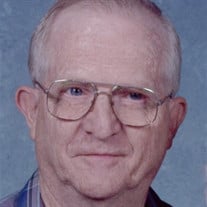 Bill L. Pyle, age 86, of Celina, OH, passed away of a broken heart on Monday, February 13, 2017 at 7:30 am at Briarwood Village, Coldwater, OH. He was born May 15, 1930 in Geneva, IN to the late John and Glendolyn (Bryan) Pyle. On December 12, 1953 He married Wanda Manning, they were together for 64 years; she preceded him in death on February 4, 2017. He is survived by his three children, Diana Hellwarth, Celina, OH, Kevin (Jenny) Pyle, Celina, OH, and Peggy (Tim) Vaught, Murray, KY; two brothers, Bob (Freda) Pyle, Berne, IN, and Jim (Alice) Pyle, Bradenton, FL; two sisters, Roberta (Larry) Maloney, Linn Grove, IN, and Jenny Schilser, IN; ten grandchildren, Terry Hellwarth, Tracy (Trent) Hamrick, Tara (Jeff) Davis, Tiffany Hellwarth, Kristen (Marc) Andrews, Kelsie Pyle, Kody (Katie) Pyle, Katie Pyle, Sarah Vaught, and Jesse Vaught; and 11 great grandchildren. Bill was also preceded in death by a son-in-law, Larry Hellwarth; an infant great granddaughter, Julia Andrews; a brother, Jonny D. Pyle; and three sisters, Thelma Kongar, Imogene (Sam) Hart, and Maxine (Jack) Davis. He was a 1947 graduate of Geneva High School, Geneva, IN. He retired from Mersman Table Factory in Celina after 35 plus years of service, after retiring he drove for Kerns in Celina for many years. He was a life member of Grace Missionary Church, Celina, OH. Bill was known for his woodworking skills, and his homemade ice cream. He enjoyed St. Louis Cardinals baseball, Indiana University basketball, bowling and he umpired softball for years. His family meant the world to him, especially his grandchildren and he will be deeply missed by all. Visitation hours will be from 2-4 pm and 6 – 8 pm on Thursday, February 16, 2017, in Cisco Funeral Home, Celina. Funeral services will begin at 11:30 am on Friday morning in the Grace Missionary Church, Celina, OH, with Rev. Bruce Head officiating; the family will receive friends one hour prior to the funeral at the church. Burial will follow at Westlawn Cemetery, Geneva, IN. Contributions can be made to Grace Missionary Church, 510 Portland St., Celina, OH 45822. Please leave a condolence to the family @ www.ciscofuneralhome.com

The family of Bill L. Pyle created this Life Tributes page to make it easy to share your memories.

Send flowers to the Pyle family.