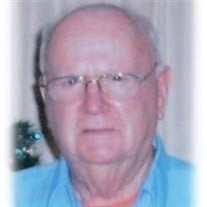 Bob L. Weitz, 87, of Celina passed away at The Gardens at Celina on July 13, 2016 at 8:45 a.m. He was born August 4, 1928 in Celina to Chris and Della (Davis) Weitz. Both preceded him in death. He married Evelyn L. Bowlby on July 1, 1950, and she preceded him in death on June 25, 2015. Other survivors include: two sons, David (Sharon) Weitz and Michael (Candy) Weitz, both of Celina; a sister, Doris Weitz of Celina; five grandchildren, Craig (Crystal) Weitz of Findlay, Nichole (Phil) Tebbe of St. Marys, Eric, Joel, and Mitchell Weitz, all of Celina; and one great grandson, Brandon Tebbe, St. Marys. He was preceded in death by a sister, Betty Egts; a sister-in-law, Helen Bowlby; and a brother and sister-in-law, Clarence (Janice) Bowlby. Bob worked at New Idea and retired from Celina City Schools, where he worked as a bus mechanic. He also owned and operated several businesses: Weitz Soft Water, as well as a bait shop and several rental properties on West Bank Road in Celina. He also enjoyed farming. He was a member of Landfair United Methodist Church in Celina and the Grand Lake Motorcycle Club. Visitation hours will be from 3 – 8 p.m. on Friday, July 15, 2016 at the Cisco Funeral Home in Celina. Funeral services will begin at 2 p.m. on Saturday, July 16, 2016 at the Cisco Funeral Home in Celina with Rev. Kathleen Hayes officiating. The family will receive friends at the funeral home one hour prior to the service. Burial will follow at the Mercer Memory Gardens in Celina. Contributions can be made to State of the Heart Hospice.

The family of Bob L. Weitz created this Life Tributes page to make it easy to share your memories.

Bob L. Weitz, 87, of Celina passed away at The Gardens at Celina...

Send flowers to the Weitz family.