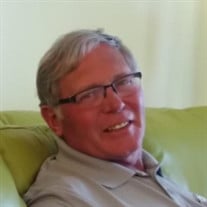 Bruce E. Hays, age 71, of Celina, Ohio, passed away on July 7, 2020 at 5:58 am at The Laurels of Shane Hill in Rockford with his family by his side. He was born June 10, 1949 in Ada, Ohio to the late Ralph and Beulah (Spar) Hays. On November 5, 1988 he married Mindy K. (Figley) Hays, and she survives at the residence in Celina. Other survivors include a daughter, Shauna (Jonathan) Walker, Memphis, Tennessee; a son, Chad (Brittany) Hays, Ada, Ohio; a stepson, Kyle Olding, Celina; three grandchildren, Seth Walker, Adam Walker and Harper Hays; a sister, Janis Carse, Harrod, Ohio; three brothers, Don (Peggy) Hays, West Mansfield, Ohio, Brad (Deb) Hays, Ada, Ohio and Rex (Bonnie) Hays, Rochester, New York; three brothers-in-law, Kim Figley, Ohio City, Ohio, Kirk (Peg) Figley, Ecuador and Kollin (Kathy) Figley, Litchfield, Michigan; and many nieces and nephews. He is also preceded in death by his father and mother-in-law, Glenn (Ruth) Figley. Bruce was a 1967 graduate of Ada High School. He was also a 1971 graduate of Ohio Northern University, where he received his bachelor’s degree in Education and was a member of the Alpha Sigma Phi fraternity. He later earned his master’s degree from Wright State University in Dayton, Ohio. In 2006, he was honored to be inducted into the Ohio Northern University Athletic Hall of Fame. After college, he taught and coached football at Versailles High School from 1971 – 1973, then went on to teach and coach football for nine years at Celina Senior High School. In 1983, Bruce founded Hays Insurance and dedicated his career to providing the best service possible to his customers until retirement in 2016 when his son, Chad, took over the family business. Bruce enjoyed boating, was an avid golfer, and loved spending time with his family and friends. He was a member of Grand Lake United Methodist Church in Celina, was very active in the ONU Alumni "N" Men's Association, and was a 40-year member of the Mercer County Elks. At the Elks, Bruce served as the Exalter Ruler (1991), District Deputy Grand Exalted Ruler (2005), and Chaplin until 2017. Bruce’s family would like to thank the nurses and staff at the The Laurels of Shane Hill for their special care they provided for him. Funeral services will begin at 6:00 pm on Friday, July 10, 2020 at Cisco Funeral Home, Celina with Rev. Mick Whistler officiating; where the family will receive friends from 2:00 pm – 6:00 pm prior to the service. Attendees are asked to follow social distancing and guidelines dictated by the Ohio Department of Health, due to the National Health Concerns of Covid-19. Memorial contributions may be made to Alzheimer’s Association and/or Foundation Fighting Blindness and/or Grand Lake Hospice. Please leave condolences to the family at www.ciscofuneralhome.com

The family of Bruce E. Hays created this Life Tributes page to make it easy to share your memories.

Send flowers to the Hays family.