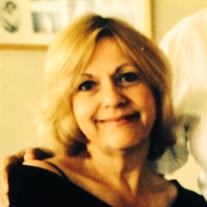 Carol Vogel, 70, of St. Marys, passed away on September 13, 2016, after an incredibly brave battle against cancer. She will be deeply missed by her many family and friends who loved her dearly and enjoyed her company daily. Carol was born in Welch, WV, on December 5, 1945. She was one of 12 children of Lum and Ada Mae Flanagan. Her incredible stories of growing up "poor" in the coal mining hollers of West Virginia, were never tales of desperation, but of family, love, adventure and hope. Carol's number one priority was always family. First and foremost, were her dear surviving sissies and brother, including Irene Alsobrook (Oklahoma City), Betty Spaulding (Lima), Pat York (Franklinton, NC), Eunice Coldiron (Celina), Theresa Klosterman (St. Marys), Linda Lane (Lerona, WV) and Larry Flanagan (Rathdrum, ID). Their bonds were inseparable from their days growing up together to the moment she passed with many of them close by her side. She was preceded in death by sisters Geneva "Ege" Beeman and Edith "Babe" Phillips, and brothers Frank and Don Flanagan, who will be waiting in heaven for her with open arms. Second, were her children, who were her pride and joys, including Ken Ashley (Pittsburgh, PA), Alex Vogel (Celina) and Heidi Vogel (Celina). She gave so much of herself to her kids, including her love of life, laughter, art, music and games of skill. She was an incredible parent, advisor, supporter and motivator. Third, were her grandchildren, who she doted and bragged on including Callie and Cody Vogel (Celina), Chelsea Westgerdes (Celina) and Michael Patrick Teeters (Celina) and great grandchildren, Lexi and Bentley (Celina). Watching them grow, attending soccer and ball games, seeing them become adults and go to college gave her much pleasure. Fourth, was her late husband of 40 years, Wolfgang Vogel, who passed away in 2003. She and Wolfie created many memories together while living in Chicago, Idaho and Ohio, and while working at Huffy's in Celina. Carol had many passions. She loved to travel. Her favorite destinations were Florida to hunt for seashells, Vegas to play poker and Italy to walk the cobbled streets and admire the many fountains. She also enjoyed playing poker, especially Texas Hold'em. Whether it was in Vegas, at the Beau Rivage in Biloxi or Greektown in Detroit, you could find her enjoying good conversation with friends, dealers and strangers, while raking in large pots. In addition to her sisters who were able to be by her side every day of her last days, her children are incredibly thankful for the overwhelming support of so many family members. Special gratitude is extended to Theresa Klosterman, Eunice Coldiron, Melissa Spaulding, Kim Coldiron and Stacy Sleeper (Klosterman) for offering their immense love, support and assistance during her visits at The James and while undergoing long-term hospice care. Following a graveside service for family, Carol will be interned with her Wolfie at Elm Grove Cemetery in St. Marys. In lieu of flowers, the family ask that you please send a donation to Grand Lake Hospice, 1122 East Spring, St. Marys, OH 45885, as thanks for their loving care of Carol and so many others. Services have been entrusted to Cisco Funeral Home, St. Marys.

Carol Vogel, 70, of St. Marys, passed away on September 13, 2016, after an incredibly brave battle against cancer. She will be deeply missed by her many family and friends who loved her dearly and enjoyed her company daily. Carol was born in... View Obituary & Service Information

The family of Carol Vogel created this Life Tributes page to make it easy to share your memories.

Send flowers to the Vogel family.