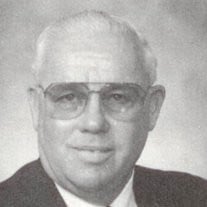 Charles E. Mann, 75, Wapakoneta, OH, passed away, Saturday, August 3, 2013, 8:25 PM, at Auglaize Acres, Wapakoneta, OH. He was born October 19, 1937 in Portland, IN, the son of Norman E. and Alta B. (Miller) Mann, both preceded him in death. On November 24, 1955 he married Janet I. Slack; she survives at the residence in Wapakoneta. He is survived by a daughter, Becky Sue (Mann) Manbeck, Wapakoneta; a brother, Fred (Shirley) Mann, Portland, IN; and three grandchildren, Ashley (Curt) Behr, St. Marys, Kyle Denney, St. Marys and Christopher (Jessica) West, Dayton. He was preceded in death by a daughter, Sherry Lynn West; a brother Ernest Mann; and a granddaughter, Laura Denney. Charles was a 1955 graduate of Jay County High School. He retired from the Dana Corporation, Angola, IN, after 35 years of service, where he served as plant manager. In addition, he spent his lifetime farming. Visitation hours will be from 9 – 11 on Tuesday August 6, 2013 in Cisco Funeral Home 1175 E. Greenville Rd., St. Marys. Funeral services will follow at 11:00 AM in the funeral home with Rev. Ed Bray, officiating. Burial will follow at Elm Grove Cemetery, St. Marys. Memorial contribution can be made to Auglaize Acres and or Auglaize County Cancer Association.

The family of Charles E Mann created this Life Tributes page to make it easy to share your memories.

Send flowers to the Mann family.