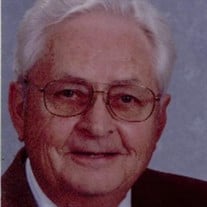 Charles Lewis Spriggs On May 28, 1939 Charles confirmed his faith and belief in the death and resurrection of Jesus Christ. He was born June 14, 1925 in Celina, Ohio. On October 23, 2015 at the age of 90 he entered into eternal rest. He was preceded in death by his parents, Lisle and Amelia Spriggs, sister, Constance Havel Giraud; and his loving wife M. Jeane Spriggs. Charles graduated from Celina Senior High School in 1943. The he entered the US Army for basic training and wheeled Vehicle Mechanic School at Ft. Knox. He then went over Seas for 13 months – landed at Normandy Beach a few days after D-Day and then onto France, Germany, Belgium and Austria. He drove a half-track for the Assistant Executive for the 274th armored field artillery battalion A-battery (they had 4 major Battle Stars). Charles was discharged December 6, 1945 surviving the war uninjured, by the Lords mercy. He married Miriam Jeane Monroe on March 22, 1947. They were married for 68 years and had 2 daughters and a son. Charles joined his father Lisle K. Spriggs in the family business, Spriggs Oldsmobile Inc., Celina, Ohio in 1945 and later sold the business and retired in 1985. In Celina he was a 70 year life member at the American Legion Post 210, and past commander; Charter and life member for 69 years of VFW post 5713; member of Grand Lodge 241 Mason’s; Mercer County Sportsman’s Association; Board of Director at Mercer County Savings Bank from 1967-1995; Commissioner on the Mercer County Veterans Commission from 1971-1995; life member of St. Johns Lutheran Church where he was baptized and confirmed. His interests were hunting small and large game and fishing. He will be missed by his children: daughter, Penny A. Spriggs Laudick (Larry); daughter, Ginger Spriggs Smalley (Scott); and son Terry Spriggs. Charles was blessed with grandchildren: Collin (Melissa); Jason (Amy); Kevin (Katie); Cami (Pete); Mark and Cassie (Cody) and great grandchildren: Ashlyn, Ellie, Lauren, Shyla, Keanna; Tayler and Piper; Noelle, Cooper and Apphia. Visitation hours will be from 5 – 7 P.M., Tuesday, October 27, 2015 in the Cisco Funeral Home, Celina; where the Celina American Legion Post 210 and Celina VFW Post 5713 will have services at 7:00 P.M. Memorial services will begin at 10:30 AM on Wednesday in the St John Lutheran Church, Celina, with Rev. Dr. Jeff Gramza officiating; where the family will receive friends one hour prior to the service. Burial will follow at North Grove Cemetery, Celina, OH; where military honors will be provided by the Celina American Legion Post 210 and Celina VFW Post 5713. In lieu of flowers contributions can be made to St. Johns Lutheran Church Campership Fund.

Charles Lewis Spriggs On May 28, 1939 Charles confirmed his faith and belief in the death and resurrection of Jesus Christ. He was born June 14, 1925 in Celina, Ohio. On October 23, 2015 at the age of 90 he entered into eternal rest. He was... View Obituary & Service Information

The family of Charles Lewis Spriggs created this Life Tributes page to make it easy to share your memories.

Charles Lewis Spriggs On May 28, 1939 Charles confirmed his faith...

Send flowers to the Spriggs family.