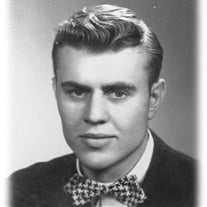 Clair S. Jones, 85, passed away surrounded by his family at his residence in Celina, Ohio on Saturday, May 21, 2016 at 8:45 pm. He was born August 28, 1930 in Kenton, Ohio to Frank and Margaret (Welling) Jones, who both preceded him in death. Clair married Donna B. Sloan on August 2, 1953, and she preceded him in death on July 12, 2014. Other survivors include a daughter, Patricia (Thomas) Buening, Columbus, Ohio; a brother, Cloyd Jones, Kenton, Ohio; two sisters, Martha Ann Bash, Kenton, Ohio, and Miriam Marshall, Ada, Ohio; brother-in-law’s and sister-in-law’s, Vernon (Carol) Sloan, Stryker, Ohio, and Wilma Sloan, Bryan, Ohio; five grandchildren, Matthew (Amber), Ryan, Andrew, Jennifer, and Amy; and a great grandson, Thomas. He was preceded in death by a daughter, Jennifer Jones; three brother-in-law’s, Paul Bash, Jack Marshall, and Virgil Sloan; and a sister-in-law, Gertrude (Ray) Goachee. Clair was a 1948 graduate of Dunkirk High School, he went on to receive his bachelor’s and master’s degrees from The Ohio State University where his focus was on vocational-agricultural. He served his country in the United States Army during the Korean War, where he was stationed at Fort Lewis in Seattle, Washington. Clair began his teaching career in vocational-agriculture at McComb High School for one year, from there he went on to teach for 10 years at St. Henry High School and finally retired at Celina High School after 25 years of service. In addition he also worked as a certified seed inspector for Mercer, Auglaize, Van Wert, and Darke Counties. After retiring he went on to work at Neptune Elevator and Mercer County Elks Golf Club. He was a member of St Paul’s United Methodist Church, Celina, Celina VFW Post 5713, Celina American Legion Post 210, and the Mercer County Sportsman Association; where he serviced as a trustee. Clair enjoyed fishing, hunting, boating, and anything related to farming. He was a loving husband, father, and grandfather and he will be missed by all. Visitation hours will be from 2-4 and 6-8 pm, Wednesday, May 25, 2016 at Cisco Funeral Home, Celina. Funeral services will begin at 10:30 am on Thursday, May 26, 2016 in the St. Paul’s United Methodist Church with Rev. Matt Reynolds officiating. The family will receive friends from 9:30 am –10:30 am prior to the service. Burial will follow at Swamp College Cemetery, Celina, Ohio; where military honors will be provided by the Celina American Legion Post 210 and Celina VFW Post 5713. Contributions can be made to Mercer County Junior Fair Board and or Mercer County FFA.

Clair S. Jones, 85, passed away surrounded by his family at his residence in Celina, Ohio on Saturday, May 21, 2016 at 8:45 pm. He was born August 28, 1930 in Kenton, Ohio to Frank and Margaret (Welling) Jones, who both preceded him in death.... View Obituary & Service Information

The family of Clair S. Jones created this Life Tributes page to make it easy to share your memories.

Clair S. Jones, 85, passed away surrounded by his family at his...

Send flowers to the Jones family.