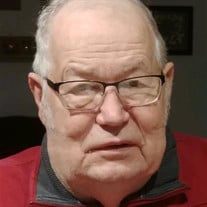 Dale Hanna, age 82, of Celina, passed away on Monday, May 27, 2019, at his residence. He was born April 14, 1937, in Mercer County, to the late Garnet and Daisy (Norris) Hanna. On Sept. 9, 1954, he married Dottie (Wurster) Hanna, and she preceded him in death on May 16, 2014. Surviving are two daughters, Debra Hanna, Tacoma, Wash., and Diana Hanna, Cave Creek, Ariz.; a brother, George (Linda) Hanna, Celina; two grandchildren; and two great-grandchildren. Deceased are three brothers, Carl, Vernis, and Clifford Hanna; and three sisters, Mary (Paul) Meeds, Dorothy West, and Virginia Yohey. He retired after working for many years as a contractor and managed a building supply store. He was a member of Abounding Grace Ministries in Celina, Gideons, MAPS, and actively built churches, helped families with construction projects, and was in service to his community. Funeral services will be 11:00 a.m. Saturday, June 1, 2019 at Cisco Funeral Home, Celina, the Rev. Rick Brosher officiating; where the family will receive friends from 9:00 a.m. – 11:00 a.m. prior to the funeral. Burial will be in Swamp College Cemetery, Celina. In lieu of flowers memorial contributions may be directed to Abounding Grace Ministries, 7495 US-127, Celina, Ohio 45822. Condolences may be left at www.ciscofuneralhome.com.

The family of Dale Hanna created this Life Tributes page to make it easy to share your memories.

Send flowers to the Hanna family.