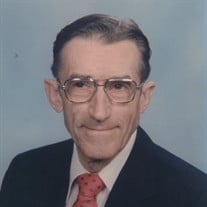 Daniel Dean Miesse 94, of Celina, OH, passed away September 14, 2017 at The Gardens of Celina. He was born October 16, 1922, in Mercer County to Oran and Zella (Siler) Miesse, who are both deceased. He was also preceded in death by his wife of 73 years Pauline Miller Miesse and his brother Robert Miesse. He is survived by two sons Douglas (Anjel) Miesse of Midwest City, OK and Malcolm (Donna) Miesse of Decatur, IN. Also surviving are three grandchildren Brian (Ann) Miesse, Greenfield, IN, Craig Miesse, San Jose, CA and Andy (Emily) Miesse, Durham, CT. Six great-grandchildren Benjamin, Ella, Jacob, Samuel, Oliver, and Margot Miesse also survive. Daniel graduated from Celina High School in the class of 1940. He and Pauline were married November 8, 1943. He worked at Wright-Patterson AFB in Dayton and Westinghouse in Lima prior to serving in the Army in WW II. He retired from Goodyear St Marys as an industrial engineer after 37 years. He is a long time member of St Paul’s United Methodist Church (now Grand Lake UMC) in Celina. He enjoyed traveling and fishing and belonged to the Mercer County Sportsmen Club and the American Legion Post 210, Celina. Visitation hours will be from 4 – 7 pm on Monday, September 18, 2017, in Cisco Funeral Home, Celina; where a prayer service will be held by the Celina VFW and American Legion Members at 7:00 pm. Funeral services will begin at 2:00 pm on Tuesday, September 19, 2017 in the Grand Lake United Methodist Church, Celina, with Rev. Diane Mendelson officiating; the family will receive friends one hour prior to the funeral at the church. Burial will follow at North Grove Cemetery in Celina; where military honors will be provided by the Celina American Legion Post and Celina VFW Post. Memorial contributions can be made to Grand Lake United Methodist Church Scholarship Fund. Please leave a condolence to the family @ www.ciscofuneralhome.com

Daniel Dean Miesse 94, of Celina, OH, passed away September 14, 2017 at The Gardens of Celina. He was born October 16, 1922, in Mercer County to Oran and Zella (Siler) Miesse, who are both deceased. He was also preceded in death by his wife... View Obituary & Service Information

The family of Daniel Dean Miesse created this Life Tributes page to make it easy to share your memories.

Send flowers to the Miesse family.