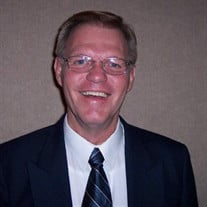 David L. Eyink, age 71, of Celina, Ohio passed away at 2:14am on September 19, 2014 at the Van Wert Inpatient Hospice. He was born on July 10, 1943 in Celina, Ohio to the late Vernon & Cecilia (Reithman) Eyink. On October 6, 1968 he married Diana J. Linton, who survives in Celina. Also surviving are Son: Douglas & Jennifer Eyink of Franklin, Ohio; Daughter: Jeanelle Braun of Celina, Ohio; Grandchildren: Anna, Ben, Molly, Jake, Luke, Joey, Josh & Jessie; Brother: Lawrence & Mary Eyink of Chickasaw, Ohio; Sisters: Marilyn & Ed Schwartz of New Bremen, Ohio and Kathleen Pleiman of Ft. Loramie, Ohio. Preceded in death by Brother-in-Law: John Pleiman. He was retired from Minster Machine where he had worked for 40 years. David as a Cub Master for Pack 69 in Celina, Ohio. He was a Real Estate Salesman 1995. David graduated in 1961 from Marion Local High School. He was a US Air Force Veteran having served from 1961 to 1964. He was a member of the Celina American Legion, Celina VFW & Celina Moose. David was a member of the Immaculate Conception Catholic Church, Celina, Ohio. Funeral services will be held at 10:30am on Monday, September 22nd, 2014 at Immaculate Conception Catholic Church, Celina, with Fr. Kenneth Alt, officiating. Burial with Military Honors will follow at North Grove Cemetery. Friends may call from 2-7pm on Sunday at the Cisco Funeral Home, Celina where military rites will be conducted at 7pm. Friends may call also call from 9:30-10:15am on Monday. Memorial contributions may be directed to Community Health Professionals. Condolences may be left at www.ciscofuneralhome.com

The family of David L Eyink created this Life Tributes page to make it easy to share your memories.

Send flowers to the Eyink family.