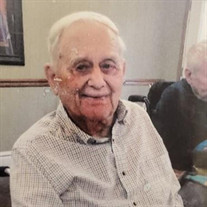 Donal “Don” L. Preston, age 92, currently residing at Otterbein in St. Marys, passed away at 3:45 pm on February 8, 2021. He was born March 4, 1928 in Neptune, Ohio to the late Charley and Flossie B. (Miller) Preston. On August 6, 1950 he married LaDonna Ruth (Baer) Preston and she survives in St. Marys. Don & LaDonna were very proud of their 70-plus years of marriage; their years together were filled with love and joy. Don is not only survived by his wife, LaDonna, but is also survived by his three sisters-in-law, Margaret Grunden of Montezuma, Myrna K. Wolfe of Neptune and Josie L. Baer of California. Don was a 1946 graduate of Neptune High School in Neptune, Ohio. He played basketball and baseball while in high school and then played baseball for a local area team. He was a member of the Neptune Church of God and he served as an Elder for the church. Don worked as an electrician for Paysen Electric in Celina, Heckler Electric in Celina, Overholt Electric in Middle Point and eventually retired from General Dynamics Land Tank Plant in Lima. He was also an avid farmer on the land that he and LaDonna owned. He farmed until he was no longer able to, as a result of a number of strokes that took a toll on him and prevented Don from doing the farming that he loved. Don loved traveling around the world with LaDonna; his favorite stops included, Europe, Great Britain, Scotland and Preston, England. While in Preston, England, Don was interested to find that the “Preston” name was a very common name in that city of England. Don and his wife LaDonna were blessed to spend their 25th wedding anniversary in Lucere, Switzerland and their 50th wedding anniversary in Alaska. Don also enjoyed playing his accordions for over 75 years; he would play for hours at a time while at home for his personal pleasure and LaDonna’s pleasure. Private family services will be held at the convenience of the Preston family. Interment will take place at Neptune Cemetery in Neptune, Ohio. Memorial contributions to be made to State of the Heart Hospice, 230 W. Main St., Coldwater, Ohio 45828. Cisco Funeral Homes of Celina & St. Marys are honored to care for Don and his family. To pay respects and to leave online condolences or memories, visit www.ciscofuneralhome.com or Cisco Funeral Home Facebook page.

The family of Donal "Don" L. Preston created this Life Tributes page to make it easy to share your memories.

Send flowers to the Preston family.