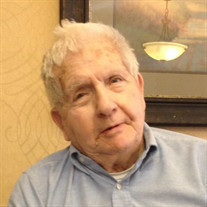 Donald Dale Bricker, age 90, of Celina, OH, passed away on Tuesday, October 25, 2016 at 10:54 pm at Celina Manor. He was born June 1, 1926 in Celina to the late John and Mabel (Rush) Bricker. He is survived by his children, Donald (June) Bricker, Wapakoneta, Russel Bricker, St. Marys, Rebecca (Rex) Miller, Rockford, Gregg A. (Shirley) Bricker, FL, and Penny Bricker Sanderbeck, Columbus; an adopted son, Jamie (Theresa) Bricker, Massillon, OH; two brothers, Gene Bricker, Indianapolis, IN, and Carl Bricker, Greenville, OH; and many grandchildren and great grandchildren. He was also preceded in death by his first wife, Marcedis “Marcie” Young; his second wife, Sondra Wagner; his third wife, Donna Lindemeyer; an adopted son, Keith Bricker; and three brothers, Bevin, Lester, and Earl Bricker. Don was a graduate of Celina Senior High School, Celina. He retired from Goodyear Tire and Rubber in St. Marys, after 40 plus years of service and he also worked his entire life farming. He was very active fostering many children throughout his life. He was a member of Victory Chapel Church, Celina. He was very active in his church and he enjoyed working on the farm. Visitation hours will be from 2-5 pm on Sunday, October 30, 2016, in Cisco Funeral Home, Celina. Funeral services will begin at 10:30 am on Monday morning in the funeral home, with Rev. Matt Overman, officiating; where the family will receive friends one hour prior to the service. Burial will follow at Mercer Memory Gardens, Celina, OH. In lieu of flowers contributions can be made to Alzheimer’s Association. Please leave a condolence to the family @ www.ciscofuneralhome.com

The family of Donald Dale Bricker created this Life Tributes page to make it easy to share your memories.

Send flowers to the Bricker family.