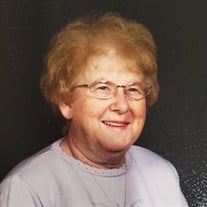 Doris J. Grunden, age 87, of Celina, Ohio, passed away on Friday, April 17, 2020 at 3:45 am at St. Rita’s Medical Center, Lima, Ohio, with her daughter’s by her side. She was born June 17, 1932 to the late Arlie and Laveda (Now) Baucher. On November 19, 1960 she married Gail J. Grunden and he preceded her in death on April 28, 2017. She is survived by her two children, Matthew “Matt” (April) Grunden, Mendon and Melissa (Eric) Smith, Celina; three sisters, Marjorie Canary, Celina, Beatrice (Robert) Linn, Rockford and Lois (Howard) Snyder, Perrysburg, Ohio; five grandchildren, Kyle Grunden, Kelli Garrity, Justin Smith, Ryan Smith and Allison Smith; six great grandchildren; and a sister-in-law, Margaret Grunden, Maria Stein, Ohio. Also preceded in death by a sister-in-law, Virginia (Don) Davis; and two brothers-in-law, Darlene Canary and Jimmie Grunden. Doris was a 1950 graduate of Celina Senior High School. She worked at Celina City Schools as a cafeteria aide, Dayton Daily News as a route driver, Charlie’s Bakery and she retired from the City of Celina after 30 years in the utilities office. She was a member of the Hopewell Grange and Grand Lake United Methodist Church in Montezuma, where she proudly played the piano and organ for many years. She was also the secretary for the Women’s Bowling Association. Her family meant the world to her and she will be deeply missed by all. Due to restrictions of the Covid-19 virus we will be following the guidelines set by the Ohio Governor Mike DeWine’s office; limiting attendance to the visitation of the funeral services to immediate family members and invited friends only. Private family and friends gathering will take place on Monday April 20, 2020 at Cisco Funeral Homes in Celina with Rev. Diane Mendelson officiating, followed by a funeral service to honor her life. Burial will be held at Ellis Cemetery in Montezuma. Cisco Funeral Homes are honored to care for Doris and her family. To pay your respects or leave online condolences or memories, visit www.ciscofuneralhome.com or visit Cisco Funeral Home Facebook page. Memorial contributions can be made to the Grand Lake United Methodist Church in Montezuma. Funeral Services have been entrusted to Cisco Funeral Homes in Celina and Saint Marys.

The family of Doris J. Grunden created this Life Tributes page to make it easy to share your memories.

Send flowers to the Grunden family.