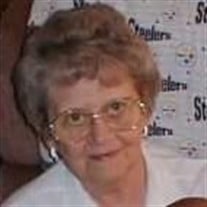 Doris C. (George) Now, 92, of Westerville, Ohio (formerly Celina, Ohio) passed away at the Village of Westerville on Monday, November 23, 2020. Doris was born on July 28, 1928 in Garman, Pennsylvania to Dr. Clarence and Anna (Crago) George. After graduating from Har-Brack High School, Brackenridge, PA in 1946, she attended Findlay College where she met her husband Morris A. Now. They were married on August 14, 1949. Doris was a dedicated mother to six children. She loved to sew and made clothing, dolls, and stuffed animals for her children and later her grandchildren. She was a wonderful cook. Doris enjoyed football, and she spent many Friday nights cheering on the Celina Sr. High Bulldogs and Sunday afternoons rooting for her Pittsburgh Steelers. After her children were all in school Doris worked as an Accounts Receivable Clerk at Landmark Celina, she retired in 1988. In her retirement Doris enjoyed traveling, playing golf, and researching family genealogy with her husband. Doris is survived by her husband of 71 years, Morris Now, as well as their six children: Pamela (Jim) Bricher and Candace Brelsford, both of Valparaiso, Indiana, Glenda (Tony) Buschur of Lac Du Flambeau, Wisconsin, Debra (Curt) Shively of Westerville, Ohio, Sandra Now of Celina, Ohio, and Michael Now of Dayton, Ohio . Also surviving are 17 grandchildren and 14 great- grandchildren. Doris was preceded in death by a son- in- law, William Brelsford; a sister, Betty Wetzel; two brothers, Richard George and Rahl George; two sisters-in-law, three brothers-in-law, and one granddaughter. Doris was a faithful Christian and was a member of Grand Lake United Methodist Church in Celina, Ohio. A memorial service will be held at a later time. In memory of Doris, contributions could be made to Heartland Hospice (6500 Busch Blvd. #210, Columbus 43229) or to Grand Lake United Methodist (119 E. Fulton St, Celina 45822). Cisco Funeral Homes of Celina & St. Marys are honored to care for Doris and her family. To pay respects and to leave online condolences or memories, visit www.ciscofuneralhome.com.

The family of Doris C. Now created this Life Tributes page to make it easy to share your memories.

Send flowers to the Now family.