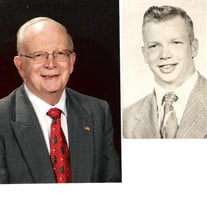 Edison Lee Wreede, 81, Celina, died May 7, 2014, at Lima Memorial Hospital. Edison was born in Van Wert County to Roy Henry Wreede and Helen Mae (Ladd) Wreede on September 3, 1932. On June 21, 1953, he married Nancy J. Knierim who survives. Family members include their four children, Stephen (Rose) Wreede, Mansfield; Paul (Lori) Wreede, Minnesota; Jonathan (Christy) Wreede, Anna; Susanna (John) Hines, Iowa; 11 grandchildren and 4 great-grandchildren. Also surviving are his sister, Barbara (Curtis) Copeland, Wapakoneta; and brother, William (Pamela) Wreede, Rushylvania. A graduate of Waynesfield High School, Mr. Wreede was owner of Holtkamp Implement and EZ Hutch, both in Kettlersville, Ohio. He designed the first molded rectangular plastic calf hutch and other animal shelters in the industry. From 1960 to 1970, Mr. Wreede was a salesman to McCune and Company. He was a member of St. John Lutheran Church, Celina, and served as usher, reader, and communion assistant. He was superintendent of the Sunday School and W.O.W. program. He had been a member of the Masonic Lodge 205 and Aladdin Temple of Columbus. Mr. Wreede was a kind and loving caregiver to his wife for many years. His memorial service will be held at St. John Lutheran Church on Friday, May 16 at 10:00am. The family will greet the community one hour prior to the service with private burial at Walnut Hill Cemetery, New Hampshire, following. Arrangements will be handled by Cisco Funeral Home, Celina.

The family of Edison Lee Wreede created this Life Tributes page to make it easy to share your memories.

Send flowers to the Wreede family.