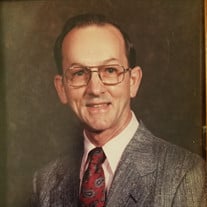 Eugene “Gene” L. Cool, age 91, passed away at 5:19 pm, on December 27, 2018, in the Celina Manor. He was born on February 12, 1927 in Gettysburg, Ohio to the late Ernest and Bonnie (Williams) Cool. Gene married Betty Brown Cool, who preceded him in death. On April 9, 1994, he married Janie M. (Renfro) Cool, who survives at their residence in Celina. Gene cherished his loving family; he is survived by two sons, Michael (Tammy) Cool of Celina and Rick (Kathy) Cool of Greenville. Gene also is a step-father to one step-son, Paul (Laurie) Renfro of Celina. Gene enjoyed the time spent with his three grandchildren, Kim Lesch, April (Sean) Shumaker, & Beth (Matt) Hale, as well as his two step-grandchildren, Tyler & Dusty Renfro, and his six great grandchildren. Gene was preceded in death by his brother and sister-in-law, Charles & Elise Cool. Gene worked and retired from BF Goodrich in Troy, Ohio, where he tested airplane brakes; he relished the skills that were involved in working. Gene had many interests, but most important to him was spending time with his family and friends. He enjoyed anything that involved the outdoors; including, boating, traveling, camping, and fishing. When he wasn’t working or spending time outdoors, he devoted a lot of time working on cars and keeping his cars spotless clean. Gene was a member of the Kingdom Hall of Jehovah’s Witnesses in Celina. Visitation hours will be held from 2:00 pm – 5:00 pm on Sunday, December 30, 2018, in Cisco Funeral Home, Celina. Funeral Services will begin at 10:00 am on Monday, December 31, 2018, in the funeral home with Elder Lynn Hall officiating. The family will receive friends from 9:00 am – 10:00 am the morning of the service. Burial will follow at Miami Memorial Park cemetery in Covington, Ohio. Condolences can be left at www.ciscofuneralhome.com Arrangements have been entrusted to Cisco Funeral Home, Celina & St. Marys.

The family of Eugene "Gene" L. Cool created this Life Tributes page to make it easy to share your memories.

Send flowers to the Cool family.