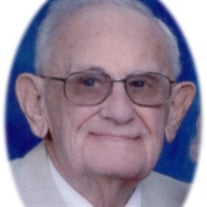 Eugene O. Linn, 89, of Celina, OH, died February 18, 2017 at 4:10 am at the Miller Place in Celina. He was born March 9, 1927 in Mercer County, OH to William and Clara (Kessler) Linn, both preceded him in death. On May 16, 1948, he married Doris (Jeanne) Rhodes, who preceded him in death on June 12, 2014. Surviving is a son, Terry Linn, Celina; two daughters, Deanna (Mike) Hathaway, Fort Wayne, Ind. and Melody (Mike) Irvine, Loveland, Colo.; two grandchildren; seven step-grandchildren; five great-grandchildren; and twelve step-great-grandchildren. He was a 1945 graduate of Rockford High School. He proudly served his country in the United States Army during the Korean War. He retired from the United States Post Office in Celina after 37 ½ years of service. After retirement he worked for 10 years as a bus drive for Celina City Schools. He and his wife owned Colonial Beauty Shop and the Tie Knot, a Celina craft store. Eugene was an avid Cincinnati Reds fan and enjoyed woodworking, crafting, dart-ball, traveling, and enjoyed all sports. He loved spending time with his family and friends. He was a member of Grand Lake United Methodist Church, Celina, Masonic Lodge F & AM 241, a 60 year member of Royal Arch Masons Chapter #51, Antioch Shrine, Auglaize-Mercer Shrine Club, Order of Eastern Star # 91, Scottish Rite Free Masonry, NMJ, Celina American Legion Post # 210, and Mercer County Historical Society. Visitation hours will be from 4:00 pm – 7:00 pm, Tuesday, February 21, 2017 in the Cisco Funeral Home, Celina; where a prayer service will be held by the Celina VFW and American Legion Members at 7:00 pm, followed by Masonic Lodge services. Funeral services will begin at 11:00 am on Wednesday morning in the Grand Lake United Methodist Church, Celina, OH with Rev. Diane Mendelson, officiating. The family will receive friends one hour prior to the funeral at the church. Burial will follow at Swamp College Cemetery, Celina, OH; where military honors will be provided by the Celina American Legion Post 210 and Celina VFW Post 5713. Memorial contributions may be directed to the Shriners Children’s Hospital and/or State of the Heart Hospice. Condolences may be left at www.ciscofuneralhome.com

The family of Eugene O. Linn created this Life Tributes page to make it easy to share your memories.

Send flowers to the Linn family.