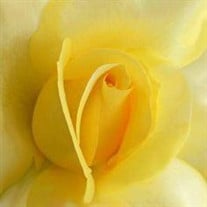 Florence E. LaRue, 95, of Celina, OH, passed away at her home, on Tuesday, September 12, 2017, at 12:00 am. She was born October 7, 1921 in Mercer County, OH to the late Lewis H. and Clara (Eichenauer) West. She married Vaughn LaRue on October 20, 1940, and he preceded her in death on October 29, 1993. Survivors include a son Roger (Linda) LaRue, New Haven, IN; five daughters, Charlene E. (David) Strock, Defiance, OH, Joyce (Oren) Skinner, Angola, IN, Marilyn (Donna Wolfe) LaRue, Morris Town, IN, Jane (Rodney) Mullins, Brookville, OH, and Terry Sue (Tony) Adams, Coldwater, OH; 13 grandchildren; 28 great grandchildren; and 5 great great grandchildren. Also preceded in death by a son-in-law, Richard Andrews; a brother, Lisle West; a sister Mildred Parsell; and a grandson, Todd Adams. Florence was a 1939 graduate of Celina Senior High School. She was devoted to her family and spent her life working as a homemaker. She was a member of Wabash United Church of Christ, Wabash, OH. Visitation hours will be from 4 - 7 pm, Friday, September 15, 2017 in the Cisco Funeral Home, Celina, OH. Funeral services will begin at 11:00 am on Saturday, September 16, 2017 in the Cisco Funeral Home with Rev. James Langham officiating; where the family will receive friends one hour prior to the service. Burial will follow at Swamp College Cemetery, Celina, OH. Memorial contributions can be made to State of the Heart Hospice, 230 W Main St, Coldwater, OH 45828. Please leave a condolence to the family @ www.ciscofuneralhome.com

The family of Florence E. LaRue created this Life Tributes page to make it easy to share your memories.

Send flowers to the LaRue family.