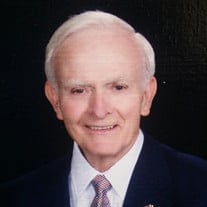 Harley C. Jones, 82, passed away surrounded by his family at his residence in Celina, Ohio on Sunday, March 20, 2016 at 2:30 am. He was born December 27, 1933 in Ritner Kentucky to Olie and Mae (Abbott) Jones, who both preceded him in death. Harley married Fay Layman on June 28, 1952, and she survives at the residence in Celina. They were happily married for 63 years, a distinction for which he was unquestionably proud of. Other survivors include a daughter, Linda Jones (Richard) Haines, St. Marys, Ohio; a son, Steven (Rebecca) Jones, Celina, Ohio; five grandchildren, Rick Haines, Columbus, Ohio, Lauren Jones (Brian) Smith, Columbus, Ohio, Angie Haines (Geoff) Lee, St. Marys, Ohio, Brian (Jill) Jones, Cincinnati, Ohio, and Kristina Haines (Bo) Frye, St. Marys, Ohio; great grandchildren Owen, Deacon, Hudson, Lenna and Caroline; a sister, Lola Shepherd, Sidney, Ohio; and several nieces and nephews. He was preceded in death by a daughter, Debra Lynn Jones and two brothers, Curtis and Ernest Jones. Harley served his country in the United States Army at the tail end of the Korean War and trained with the 101st Airborne Division commonly known as the “Screaming Eagles”. After his military service in 1954, Harley enrolled in and completed the comprehensive training program at the Gruen Watchmakers Institute earning the distinction of Certified Master Watchmaker. He subsequently began his long career in the jewelry industry employed by a jewelry store in Sidney, Ohio. Harley gained experience in retail sales while he worked as a watchmaker. In 1967 he began a partnership in Celina, Ohio which eventually led to owning and operating Jones Jeweler. He also opened and operated other successful retail stores in Wapakoneta and Sidney, Ohio before consolidating operations to the Celina Store. After a total of 55 years in the jewelry business it was time to retire and enjoy his wonderful family. Outside of work Harley was very active. He served as Chairman of the Celina Retail Merchants Association and was a past President of the Celina Area Chamber of Commerce Board of Directors. He served as a member of the Celina Income Tax Board of Review for over twenty-five years. He also served on the Mercer County Library Board, Mercer County Health Foundation, and the Community Improvement Board. He was a member of Celina Lions Club and the Celina Rotary Club, the Mercer County Republican Central Executive committee and served as a Finance Chairman for the campaign committee for State Senator Keith Faber. In 2015 Harley was awarded the Mercer County Republican of the Year. Harley had been awarded the distinction of “Citizen of the Year” in Celina and Sidney, Ohio. In Sidney he served as President of the Teen Center Board of Directors for 5 years, and Vice President of the Shelby County YMCA. He also served on the Ohio Council of Retail Merchants Board of Directors for 26 years. He was past President of the Ohio Jewelers Association and served for 15 years on its Board of Directors. During his tenure on the Board he was an integral part of the growth and success of the Columbus Jewelry Show. Harley was appointed to the Ohio Jewelers Association Educational Foundation 2007-2015. Harley led several fundraising efforts for the community, with the most recent one being a fundraiser to purchase new Christmas lights for downtown Celina. Harley spent his lifetime bringing dignity to family, hard work and professional ethics. He was very proud of Jones Jeweler being one the oldest retail stores in Celina that is still owned and operated by the same family of owners. Visitation hours will be from 2-4 and 6-8 pm, Wednesday, March 23, 2016 at Cisco Funeral Home, Celina. Funeral services will begin at 10:30 am on Thursday, March 24, 2016 in the St. Paul’s United Methodist Church with Rev. Matt Reynolds officiating where military honors will be provided by the Celina American Legion Post 210 and Celina VFW Post 5713. The family will receive friends from 9:30 am – 10:30 am prior to the service. A private burial will be held at Graceland Cemetery, Sidney, Ohio. Contributions can be made to Grand Lake Hospice, 1122 E. Spring St., St. Marys, Ohio 45885.

Harley C. Jones, 82, passed away surrounded by his family at his residence in Celina, Ohio on Sunday, March 20, 2016 at 2:30 am. He was born December 27, 1933 in Ritner Kentucky to Olie and Mae (Abbott) Jones, who both preceded him in death.... View Obituary & Service Information

The family of Harley C. Jones created this Life Tributes page to make it easy to share your memories.

Harley C. Jones, 82, passed away surrounded by his family at...

Send flowers to the Jones family.