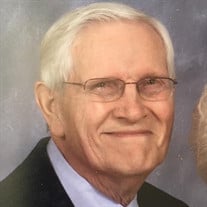 Harold O. “HOD” Dammeyer, age 91, of Saint Marys, passed away on Wednesday, January 16, 2019 at Joint Township District Memorial Hospital, St. Marys. He was born March 20, 1927 on the farm in St. Marys Township, Auglaize County, Ohio to the late Levi “Lafe” Arthur and Hilda (Neuman) Dammeyer. On August 28, 1953 he married Martha Lou (Worthman) Dammeyer; and she preceded him in death on October 20, 2010. Surviving are five sons, Scott Dammeyer, Ocala, Florida, Randy (Karen) Dammeyer, Celina, Todd (Beth) Dammeyer, Versailles, Brent (Connie) Dammeyer, Maineville, Ohio, and Jason (Adam) Dammeyer, Houston, Texas; 11 grandchildren and 19 great-grandchildren, with the 20th arriving in July. Deceased is a brother, Paul (Faye) Dammeyer; two sisters, Delilah (Wilson) Braun, and Margaret (Reuben) Meckstroth; a brother-in-law, Lloyd Worthman; and two sisters-in-law, Alta Jean (Clarence) Kuhn, and Madonna (Kenneth) Checkeye. Harold was a 1945 graduate of Saint Marys Memorial High School and attended The Ohio State University in Columbus, Ohio. He proudly served his nation in the United States Army in Germany after WWII. He was a loving father, grandfather, and great-grandfather. Harold worked 40 plus years at Stamco in New Bremen, Ohio as a senior draftsman / project manager. When he retired from Stamco in 1997, he continued full-time farming of his family farm on State Routes 219 & 364. The farm has been in the family since 1890 and recognized by the State of Ohio as a century family farm. A final request was honored as Rob Cisco escorted Dad’s body past our farm on way from the hospital to the funeral home in Celina. Other passions besides farming include singing & whistling with the Sunshine Singers of Mercer County Council on Aging. Music was a family specialty with Lafe on his fiddle & Hilda on her piano. As they say music opens the soul’s window. He also loved sports and enjoyed playing community baseball for New Bremen and Chickasaw. Harold was a confirmed member of Saint Pauls United Church of Christ in New Bremen. After marrying his sweetheart, Martha in 1953 (officiated by the Senator Tennyson Guyer), he transferred his membership to the Celina First Church of God in 1968. In addition, he was also a member of the New Bremen American Legion Post # 241, and a life member of the Celina VFW Post # 5713. A gathering of family and friends will be held from 2:00 pm – 5:00 pm on Sunday, January 20, 2019 in Cisco Funeral Home, Celina; where Celina VFW membership service will be held at 5:00 pm. Funeral services will be at 10:30 am on Monday, January 21, 2019, at Celina First Church of God in Celina, with Rev. Craig Flack officiating; with Military Honors to follow at the church. The family will receive friends from 10:00 am to 10:30 am prior to the services. Private graveside services will follow at North Grove Cemetery in Celina. Contributions can be made to Miller Place, 1506 Meadowview Dr., Celina, OH 45822 and / or Celina First Church of God, 850 Fairground Rd., Celina, OH 45822. Condolences can be left at www.ciscofuneralhome.com Arrangements have been entrusted to Cisco Funeral Home, Celina & Saint Marys.

The family of Harold O. "HOD" Dammeyer created this Life Tributes page to make it easy to share your memories.

Send flowers to the Dammeyer family.