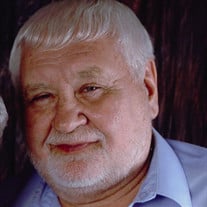 Harold E. Donovan, 76, Celina, died January 6, 2015 at Coldwater Hospital. He was born August 28, 1938 in Auglaize County to Charles and Pauline (Rasawehr) Donovan. He married Beverly C.F. Sudman, on June 27, 1959. Surviving are two children, Randy (Diane) Donovan and Terry (Connie) Donovan, all of Celina; five grandchildren, Eric (Lauren) Donovan, Westerville, Kayla (Wes) Chapman, Coldwater, Tracy Donovan, Kari Donovan, and Maria Donovan, All of Celina; two great grandchildren, Talon Donovan and Addalyn Chapman. He was a small business owner in Celina for 30 years and previously was an accomplished welder for various businesses in the area. He was a devoted father and grandfather that enjoyed all activities involving his children and grandchildren, especially sporting events. He especially enjoyed the game of hockey and IU Basketball. He enjoyed driving his drag car at the local drag strips. After he stopped driving his car, he supported various sprint car teams as a mechanic for over 25 years. In his later years, he was an avid fan of all styles of racing; He had a passion for gardening and camping and particularly enjoyed staying at Amishville, USA. Visitation will be Friday, January 9, 2015 from 2-4 and 6-8, and Saturday 9:30 - 10:30 before the service. Service will be Saturday, January 10, 2015 at 10:30 a.m. at Cisco Funeral Home, Celina, Ohio. Memorial Contributions can be made to the Mercer County Heart Association or Mercer County Cancer Association. Condolences may be left at: www.ciscofuneralhome.com

The family of Harold E. Donovan created this Life Tributes page to make it easy to share your memories.

Send flowers to the Donovan family.