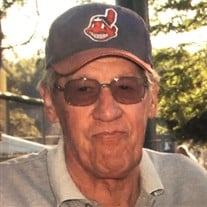 Hazen Davis, age 84, of Celina, Ohio, passed away on Sunday, January 12, 2020 at the Gardens of Celina with his family by his side. He was born July 23, 1935 to the late Kenneth “Bus” and Wanda (Teeters) Davis in rural Mercer County, Ohio. Survivors include a sister, Janet (Lee) Olding, Celina; a brother, Greg (Becky) Davis, Celina; many nieces and nephews; and longtime friend, Arlene Steinbrunner. Also preceded in death by a sister LaDonna Davis. Hazen was a 1953 graduate of Celina Senior High School. He worked for the Railway Express in Celina, Reynolds and Reynolds, Celina, and retired from the City of Celina as a meter reader after 25 years of service. Hazen was a gifted athlete, he was a starter and captain of both his high school baseball and basketball teams. His success as a high school pitcher helped him get drafted by the Cleveland Indians, where he played in their farm system for two years in Green Bay, Wisconsin and Florida. He went on to play baseball for Celina American Legion, Celina Legion Moose, Celina Merchants and Celina Independents. After his pitching career was over he went on to be an assistant coach for the Celina ACME baseball team. Hazen enjoyed being outdoors, spending time with his family and friends, animals, and watching sports, especially the Indians, Reds and Army Football. He was a member of Grand Lake United Methodist Church in Celina and was one of the first to be inducted into the Celina High School Athletic Hall of Fame. Visitation hours will be from 3:00 pm – 7:00 pm on Wednesday, January 15, 2020, at Cisco Funeral Home, Celina. Funeral services will begin at 10:30 am on Thursday, January 16, 2020 at Cisco Funeral Home, Celina with Rev. Diane Mendelson officiating; where the family will receive friends one hour prior to the service. Burial will follow at Swamp College Cemetery in Celina. Memorial contributions may be made to Celina Mariners Baseball and/or Animal Protection League in Celina. Please leave condolences to the family at www.ciscofuneralhome.com

The family of Hazen E. Davis created this Life Tributes page to make it easy to share your memories.

Send flowers to the Davis family.