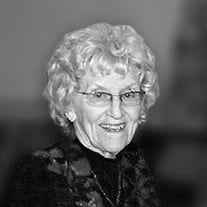 Iona (Spicer) Hoffman, age 94, of Celina, Ohio, died at 8:15 am on Tuesday, October 9, 2018 at Otterbein Lifestyle Community. She was born February 24, 1924 to Marvin and Emma (Kettler) Spicer and lived most of her life in Celina. Surviving are her daughter, Pamela Efaw, of Columbus, OH and her son, Terry A. (Leslie) Hoffman of Loveland, OH. She has three grandsons, Eric (Melissa) Hoffman of Stamford, CT, Jay (Jessica) Hoffman of Cincinnati, OH and Ross Efaw (Robin Shirley) of Los Angeles, CA. She felt blessed to have five great-grandchildren, Emma and Caroline Hoffman, Grayden and Mia Hoffman, and Olivia Efaw. Also surviving is her brother, Eugene Spicer of Celina. Deceased are sister-in-law, Naomi Spicer, and brother-in-law, Keith Hoffman and his wife, Betty Hoffman Lechifflard. Iona was a 1942 graduate of Celina High School and attended Ohio State University where she studied Fine Art. During WWII she was a secretary at Wright Patterson Air Force Base. She was a lifetime member of St. Paul’s United Methodist Church in Celina. In 1946, she married her high school sweetheart, Dana Kermit (Pat) Hoffman. They shared 61 years of marriage, enjoying many activities together, including fishing, golfing, and traveling together with friends and family. Her husband passed on to greener fairways in 2007. Iona was a member of Iota Gamma Chapter of Phi Beta Psi sorority. While her daughter was growing up, she served as a girl scout leader for Troop 216. She was also employed as deputy recorder of Mercer County. During her life, Iona enjoyed playing bridge with her friends, sewing, and attending sports and musical events. She brought her love of art and creativity with her to Otterbein in 2013, and became a volunteer for “My Very Own Blanket” project of Columbus, OH, designing and making blankets for foster children. She was voted a Volunteer of the Year at Otterbein in 2015. She belonged to the Art class and enjoyed water color painting, but colored pencil sketching became her favorite activity. She spent many hours capturing the fine details in her drawings. At 94 years of age, she laid down her pencils for the last time. “God was good to me,” she would say. Funeral services will begin at 11:30 am on Tuesday, October 16, 2018 at Cisco Funeral Home in Celina with Rev. Mick Whistler officiating; where the family will receive friends from 10:00 am – 11:30 am prior to the service at the funeral home. Burial will follow at North Grove Cemetery in Celina. Memorials can be made to Grand Lake United Methodist Church, 119 E. Fulton St., Celina, Ohio 45822 and/or Otterbein Senior Lifestyle Choices, 11230 OH-364, St. Marys, Ohio 45885. To share memories with the family, visit www.ciscofuneralhome.com.

Iona (Spicer) Hoffman, age 94, of Celina, Ohio, died at 8:15 am on Tuesday, October 9, 2018 at Otterbein Lifestyle Community. She was born February 24, 1924 to Marvin and Emma (Kettler) Spicer and lived most of her life in Celina. Surviving... View Obituary & Service Information

The family of Iona Hoffman created this Life Tributes page to make it easy to share your memories.

Send flowers to the Hoffman family.