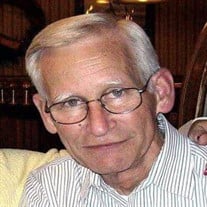 James “Jim” Lee Hullinger, 74, passed away surrounded by his family at his residence in Celina, Ohio on Tuesday, August 9, 2016 at 12:40 am. He was born February 12, 1942 in Celina to Fred and Bessie (Fett) Hullinger, both preceded him in death. Jim married Patricia “Pat” Layton on December 27, 1964, and she survives at the residence in Celina. They were happily married for 51 years. Other survivors include a daughter, Lisa Overholser, St. Paris, OH; a son Brian (Megan) Hullinger, Ft. Wayne, IN; two sisters, Patricia (Doyle) Wheeler, Amarillo, TX and Mary Kay (Jerry) Purdy, Ft. Wayne, IN; and six grandchildren, Andrew Williams, Adam Overholser, Keri (Tim) McCarty, Zachary Overholser, Alex Hullinger, and Sydney Hullinger. Also preceded in death by three brothers, Frank “Chuck” (Mary Ann), Fred (Edna) and Dick (Louise) Hullinger; and a sister, Carol (Joe) Bill. Jim was a 1960 graduate of Celina Senior High School. He served his country in the United States Army during the Vietnam Era. He retired in 2003 as the owner and operator of Miji Photo and prior to that National Video both in Celina. Jim was a member of Bethany United Methodist Church, Celina and Celina VFW Post 5713. He enjoyed golfing, working and spending time with his family and friends. He will be greatly missed by all. Visitation hours will be from 10:00 am – 2:00 pm and 4:00 pm – 6:00 pm, Saturday, August 13, 2016 in the Cisco Funeral Home, Celina. Funeral services will begin at 2:30 pm on Sunday, August 14, 2016 in Bethany United Methodist Church with Rev. Dale Leinbach officiating and Rev. Jon Exman co-officiating. The family will receive friends from 2:00 pm - 2:30 pm prior to the service. Burial will follow at North Grove Cemetery, Celina; where military honors will be provided by the Celina American Legion Post 210 and Celina VFW Post 5713. Contributions can be made to CHP Home Care and Hospice, Celina.

The family of James "Jim" Lee Hullinger created this Life Tributes page to make it easy to share your memories.

James “Jim” Lee Hullinger, 74, passed away surrounded by his...

Send flowers to the Hullinger family.