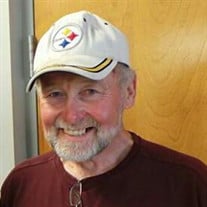 James “Jim” E. Ross, age 72 of St. Marys passed away on July 29, 2018 at 4:12 am at St. Ritas Medical Center in Lima. He was born August 16, 1945 in Meadville, Pennsylvania to Dr. John & Mildred (Harris) Ross, who both preceded him in death. On February 7, 2004 he married Joyce (Piper) Ross who survives at their residence in St. Marys. Jim is the father to Bill (Deb) Ross of Ansonia, Kim Ross of Celina, Dr. Amanda (Dr. Chris) Stevenson of Salem, OR, and Jason (Jessica) Ross of Coldwater. He is also a step-father to Scott Borger of Ft. Wayne, IN, Kerry (Julie) Borger of Englewood, Sara (Bernie) Fast of Celina, and Brock (April) Borger of Celina. He is a sibling to John (Wendie) Ross of Erie, PA, and Rev. Barbra (Harold) Kinsler of Frankfort, IN. Jim is a grandfather to twenty-five grandchildren and eight great grandchildren. He was also preceded in death by a step daughter Laura Frahm and three grandchildren, Craig Gengler, Zach Ross, and Alivia Nuding. Jim is a 1963 graduate of Townville High School in Townville PA. He went on to proudly serve his county in the US Army. Jim was the owner / operator of Jim’s Handyman Services in St. Henry, and he was also employed at Acutech Films & Future Polytech. Jim was a member of Zion Lutheran Church in St. Marys. Jim enjoyed fixing anything, working on cars, nature, cooking over a fire and anything that involved the outdoors. Most importantly to Jim was spending time with his family and friends, he will be deeply missed by all. Visitation hours will be from 10:00 am – 12:00 pm on Saturday, August 4, 2018, in Cisco Funeral Home, St. Marys. Memorial services will begin at 12:00 pm in the funeral home, following visitation with Pastor Bill Maki officiating. Memorial contributions can be made directly to the family. Condolences can be left at www.ciscofuneralhome.com Arrangements have been entrusted to Cisco Funeral Home, St. Marys & Celina.

The family of James "Jim" E. Ross created this Life Tributes page to make it easy to share your memories.

Send flowers to the Ross family.