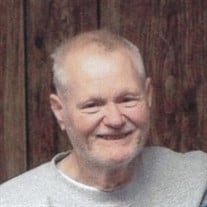 James Douglas “Doug” Rickard, 67, of Celina passed away at his home on July 27, 2016, at 1:03 am. He was born June 28, 1949 in Celina to James Jr. and Mary Catherine (Zizelman) Rickard, both preceded him in death. He married Sandy Endicott on June 29, 1973, and she survives at the residence in Celina. Other survivors include his four children, Matt (Deb) Rickard, Bryant, IN, Mike (Annette) Rickard, Celina, Nikki (Mark) Cotterman, Coldwater, and Jean (Tom) Pruitt Jr., Celina; four sisters, Roberta (Gordon) Brown, Rockford, Brenda (Tex) Keifer, Mendon, Cathy (Carl) Frank, Mendon, and Mary Lou (Kevin) Fisher, Rockford; eleven grandchildren and eight great grandchildren. He was also preceded in death by a brother, Keith Rickard. Doug retired as a truck driver from Norris Milk Hauling. He was a member of The Lords Church, Celina. Funeral services will begin at 4:00 pm on Friday, July 29, 2016 in the Cisco Funeral Home, Celina with Pastor Randy Christian officiating; where the family will receive friends from 2:00 pm – 4:00 pm prior to the service. Burial will follow at the Mercer Memory Gardens, Celina. Contributions can be made to State of the Heart Hospice, Coldwater and / or Cancer Association of Mercer County. Please leave a condolence to the family @ www.ciscofuneralhome.com

The family of James Douglas "Doug" Rickard created this Life Tributes page to make it easy to share your memories.

James Douglas “Doug” Rickard, 67, of Celina passed away at his...

Send flowers to the Rickard family.