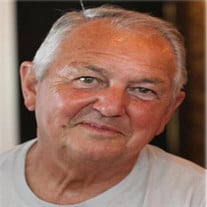 Jerry W. Rutledge, age 74, of Celina, OH, passed away unexpectedly on Friday, September 23, 2016 at 10:00 am at his residence. He was born November 4, 1941 in Rockford, OH to the late Kenneth and Doris (Clouse) Rutledge. On August 12, 1967 he married Jane Knoth, they were together for 49 wonderful years; and she survives at their residence in Celina. He was also survived by two sons, Gregg (Kristin) Rutledge, Celina, OH, and Eric (Andrea) Rutledge, Ortonville, MI; two brothers, Bill (Myrna) Rutledge, Piqua, OH, and Jack (Phyllis) Rutledge, Rockford, OH; two brother-in-law’s, Jim (Nancy) Knoth, Dayton, OH, and John (Brenda) Knoth, Nitro, WV; a sister-in-law, Janet Turner, Lakeview, OH; and five grandchildren, Ericca, Rece, Ayria, Layla and Maisie. Jerry was also preceded in death by his in-laws, Henry (Mildred) Knoth; three brother-in-law’s, Larry Riegelsperger, Dave Turner, and Jerry (Barbara) Knoth. He is a 1959 graduate of Rockford High School, Rockford, OH. He served his country in the United States Army during the Vietnam era. In 2005 he retired from Reynolds and Reynolds in Celina after 35 plus years of service. He was a member of Immaculate Conception Catholic Church - Celina, Celina Moose, Celina Eagles Lodge 1291, and Celina VFW Post 5713, he was also a life member of the Celina American Legion Post 210; where he served as the adjutant for 25 years. His family meant the world to him and he was very proud of all of them. Jerry so enjoyed spending time with his family, friends and his five wonderful grandchildren. His grandchildren would say he was a fun loving grandpa and they will miss him so much. He also enjoyed his carefree days gardening, being outdoors, working in his workshop and also watching the Bears. Visitation hours will be from 2-8 pm on Tuesday, September 27, 2016, in Cisco Funeral Home, Celina; where a prayer service will be held by the Celina VFW and American Legion Members at 7:00 pm. Mass of Christian burial and the celebration of his life will begin at 10:30 am on Wednesday morning in the Immaculate Conception Catholic Church, Celina with Fr. Ron Wilker, officiating. The family will receive friends one hour prior to the funeral mass at the funeral home. Burial will follow at St Elizabeth Cemetery, Coldwater, OH; where military honors will be provided by the Celina American Legion Post and Celina VFW Post. In lieu of flowers contributions can be made to Celina American Legion Scholarship Fund and/or Immaculate Conception School. Please leave a condolence to the family @ www.ciscofuneralhome.com

The family of Jerry W. Rutledge created this Life Tributes page to make it easy to share your memories.

Send flowers to the Rutledge family.