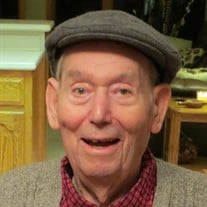 John Howard Kleinhenz, 86 passed away on January, 23, 2016. He was born on November 28, 1929 in St. Marys, Ohio to Alfred and Agatha (Dorsten) Kleinhenz; both precede him in death. He married Janet (Eischen) Privett on December 18, 2004 and she survives at the residence in Montezuma, Ohio. He is preceded in death by his first wife, Virginia “Ginny” (Borgert) Kleinhenz. They were married on June, 10 1950. Ginny passed away on October 6, 2002. Also deceased are four of John and Ginny’s children Ann, Deborah, Rick and John “Jack”. Survivors include John and Ginny’s two daughters, Theresa Kleinhenz and Jeanine (Matt) Forwerck, all of Montezuma. Janet’s children, Bob (Dawn) May, Pendleton, IN, Linda (Duane) Hurst, Fountain Hills, AZ, Cindy (Don) Denny, Lori (Larry) Laux, Ron (Debbie Bonvillian) May, all of Portland, IN. 16 Grandchildren, 15 Great Grandchildren. Brother-in laws: Don Kuhn, Orville (Carol) Eischen. Sister-in laws: Susie (Ed) Wagner, Norma Borgert, Susan (Gary) Jones, Phyllis (Al) White, and Barbara Eischen. Prior to retirement, John worked as a livestock buyer for Middendorf Stockyards and was the owner of Arnie’s Corner Restaurant for over 40 years. He was a member of Our Lady of Guadalupe Parish, Montezuma and Coldwater Eagles Auxiliary #3025. John enjoyed playing cards, and was an avid sports fan of the Cincinnati Reds and The Ohio State Buckeyes. He attended Coldwater High School and had fond memories of participating on the Montezuma and Chickasaw ball teams. “Big John” always had a smile and kind wave of the hand for anyone he came across. He was loved by many. A gathering of family and friends will be from 10AM – 12:30PM, Saturday, January, 30, 2016, at Cisco Funeral Home, Celina. Memorial Mass will begin at 1:00 PM on Saturday at Our Lady of Guadalupe Catholic Parish, Montezuma, with Rev. Alfons Minja, C.PP.S officiating. Burial will be at a later date. John chose to donate his body to the Anatomical Gift Program where he hoped his donation would help in medical advances and treatments. Donations in John’s memory can be made to State of the Heart Hospice.

The family of John Howard Kleinhenz created this Life Tributes page to make it easy to share your memories.

Send flowers to the Kleinhenz family.