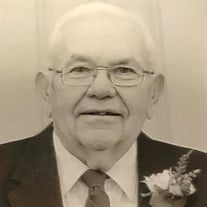 John P. Schulte, age 87, of Celina, OH, passed away on Tuesday, June 6, 2017, at 7:15 am at Celina Manor. He was born April 27, 1930, in Celina to Albert M. and Viola D. (Vanderhorst) Schulte. On December 11, 1954, he married Alice Ann McMillan, and she preceded him in death on January 26, 2009. He is survived by his children, Susan (Randy) Canary, Celina, Joan (Ty) Koontz, Celina and Stephen “Steve” Schulte (Caprice Smith), Celina; 10 grandchildren; and 4 great grandchildren. Also preceded in death by a son, James A. Schulte; a stepmother, Hilda M. Schulte; and a brother Gerald A. Schulte. He was a 1948 graduate of Immaculate Conception High School. He went on to obtain an A.B. degree from St. Joseph’s College in Rensselaer, IN, and a law degree from the University of Cincinnati School of Law. He served his country in the United States Army during the Korean War. He retired from the Celina Group as Vice President of Claims in 1993 after 39 years of service. John was a member of Immaculate Conception Catholic Church, Celina K of C and Celina American Legion Post #210. He enjoyed fishing, golfing, bowling, woodworking, vacationing and most of all spending time with his family. Visitation hours will be from 3 - 7 pm on Thursday, June 8, 2017, in Cisco Funeral Home, Celina; where a prayer service will be held by the Celina VFW and American Legion Members at 7:00 pm. Mass of Christian burial and the celebration of his life will begin at 10:30 am on Friday morning June 9, 2017, in the Immaculate Conception Catholic Church, Celina, with Fr. Kenneth Alt C.PP.S., officiating. The family will also receive friends one hour prior to the funeral mass at the funeral home. Burial will follow at St. Marys Catholic Cemetery, Celina, with military honors by Celina VFW Post #5713 and American Legion Post #210. Memorial Contributions may be made to the Immaculate Conception Endowment Fund, to benefit the church. Please leave a condolence to the family @ www.ciscofuneralhome.com

The family of John P. Schulte created this Life Tributes page to make it easy to share your memories.

Send flowers to the Schulte family.