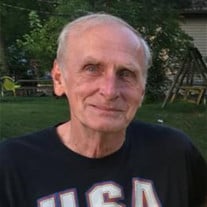 Larry R. Smelser, age 71, Celina, Ohio, died at 1:59 am, Friday, October 19, 2018. He was born in Celina on January 18, 1947 to the late Gordon and Ruth (Runyon) Smelser. On June 27, 1968 he married Grace Adele (Snyder) Smelser, and she survives at the residence in Celina. Other survivors include two sons, Scott Smelser, Celina, and Christopher “Kit” (Kaliegh) Smelser, Celina; a brother, Steve Smelser, Winchester, Indiana; a sister, Susie (Jeff) Hoenie, Celina; five grandchildren, Jesse James, Justin (Kylie) Lemasters, Jadie Smelser, Gage Stein, Makynly Smelser, and Parker Smelser; and three great grandchildren. Also preceded in death by a sister, Connie Rohyans; and a brother, Tim Smelser. Larry was 1965 graduate of Celina Senior High School. He served his country in the United States Navy during the Vietnam Era. He work for the past 47 years at The Daily Standard in Celina as a production supervisor. He was a member of the Celina V.F.W. Post #5713. His favorite activities included, being outdoors, working on his many cars and motorcycles, and spending time with his grandchildren. The family will receive friends to celebrate Larry’s life from 3:00 pm – 6:00 pm on Friday, October 26, 2018, in Cisco Funeral Home, Celina. To conclude the gathering at the funeral home, military honors will be provided by the Celina American Legion Post # 210 and Celina VFW Post # 5713. Please leave a condolence to the family @ www.ciscofuneralhome.com

The family of Larry R. Smelser created this Life Tributes page to make it easy to share your memories.

Send flowers to the Smelser family.