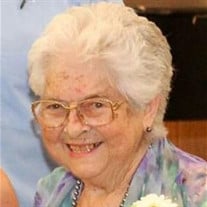 Luella M. Smith, 85 of Celina, passed away at Joint Township District Memorial Hospital, St. Marys on Monday, December 21, 2015 at 5:19 am. She was born August 11, 1930 in Mercer County to William and Naomi (Stafford) Kittle, both preceded her in death. Luella married Owen J. "Curly" Smith on July 30, 1950 and he preceded her in death on February 15, 2009. Survivors include two sons: Alan C. (Jane) Smith and Kevin A. "Snuffy" (Carol) Smith, both from Celina; four grandchildren, Benjamin (Nicole) Smith, Columbus, Ohio; Denise Smith, Westerville, Ohio; Katelin (Joe) Luthman, Lebanon, Ohio; Kelsey (Darin) Gundy, Cincinnati, Ohio; and two great grandchildren, Sydney Smith and Aiden Luthman. Luella was preceded in death by a sister, Pauline Garman and a brother-in-law Lee Garman, both from Montezuma, Ohio. Luella was a 1948 graduate of Celina Senior High School. She had worked as secretary at Stubbs-Havel Insurance Agency and as a retail clerk at Robbins Leather & Sporting Goods store of Celina. Luella and her husband were the owners of Lakeside Ceramics from 1971 - 1982, after which she was office manager at the OVISCO Corporation until her retirement. Lu was a member of St. Paul's United Methodist Church, the Church Choir, the Sunshine Singers, Celina Chapter of the Order of Eastern Star, Mercer County Democratic Central Committee, and a founding member of the Krafty Krew. She was also on the Auglaize-Mercer Family YMCA Board of Directors, proudly serving as the longest running board member. Luella spent her lifetime being a supportive Celina Bulldog fan and was a proud member of the Celina Athletic Booster Club and the Celina Band Boosters. Funeral services will begin at 2:00pm on Monday, December 28, 2015 in the St. Paul's United Methodist Church with Rev. Diane Mendelson officiating; where the family will receive friends from 12:30pm - 2:00pm prior to the service. Burial will follow at North Grove Cemetery, Celina, Ohio. Contributions can be made to: St. Paul's United Methodist Church, Celina, Ohio. Arrangements have been entrusted to Cisco Funeral Home, Celina, Ohio.

Luella M. Smith, 85 of Celina, passed away at Joint Township District Memorial Hospital, St. Marys on Monday, December 21, 2015 at 5:19 am. She was born August 11, 1930 in Mercer County to William and Naomi (Stafford) Kittle, both preceded... View Obituary & Service Information

The family of Luella M. Smith created this Life Tributes page to make it easy to share your memories.

Luella M. Smith, 85 of Celina, passed away at Joint Township...