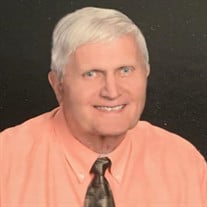 Luke Springer, age 84, of Celina, passed away peacefully to be with his Savior, Jesus Christ on Sunday, August 29, 2021 at OSU Wexner Medical Center after a difficult battle with jaw cancer, covid and other complications. He had been married to Jackie Weber Springer for 65 years prior to her passing away in January 2020 after a difficult cancer struggle of her own with MDS (Myelodyplastic Syndrome) and leukemia. Luke is survived by his children, Tim Springer, Celina and Melanie (Randy) Ewing, McComb; five grandchildren, Erika (Kevin) Draiss, Celina, Kayla Boysell, Wapakoneta, Doug (Katrina) Ewing, Bowling Green, Brandon (Nicole) Ewing, Findlay, and Ashley (Jonathan) Reist, Dublin; and nine great-grandchildren, Danica, Rylan and Emilia Draiss; Oliver Ewing; Kipp, Kassidy and Kiersten Ewing; and Stella and Bennett Reist. Luke is also survived by his sister Ann (Dick) Brandts, Cincinnati and brother Mark (Marlene) Springer, Celina; nieces, Cheryl Adams (Joe) Hutchison of Marshall MI and Jill Weber (Hirofumi) Tanaka, Austin, Texas; and nephews, Jeff (Susie) Brandts of Sandusky, Mark (Cindee) Brandts of Hilliard, Dave (Laura) Brandts of Cincinnati, Curt (Sue) Adams of Kettering, Randy (Becky) Adams of Pioneer, Terry (Jerry) Wurster, Celina, Dan (Jessica) Springer of Wolcottville IN, Scott (Sherri) Springer of Cincinnati, Jeff Springer of Austin TX , Lyndi (Michael) Woods of Perrysburg and many great-nieces and nephews. Luke was preceded in death by his faithful wife and a great-granddaughter, Scarlett Reist. His father and mother, Gerald Springer and Esther Bury Springer are deceased as were his mothers-in -law Margaret King Carpenter and Marie Berg Weber. Luke was also preceded in death by his brother in law, Bob "Chico" (Barb) Weber, his sisters Jane (Chuck) Adams and Joy (John) Wurster. Luke was a 1955 graduate of Celina Senior High School and was self employed in farming with his son, Tim. Luke was a member of, and very thankful for his church family at Grace Missionary Church in Celina. At one point he served on Grace Missionary's church board, was a delegate to their church conference and was a trustee at Grace Missionary. Luke also attended South Lake Wales Church of God in Lake Wales, Florida, where he and Jackie lived during the winter months after their retirement. While In Florida, Luke and Jackie enjoyed volunteering nearly every week at the Lake Wales Care Center. Luke loved spending time with his grandchildren and great-grandchildren. And one of his last wishes was to have his body donated to the Wright State Anatomical Gifts Program as Jackie had done. However, because he was sick with COVID at the end of his life's journey, that was unfortunately not allowed. A family and friends gathering will take place from 1pm-2pm on Sunday, September 5, 2021 at Grace Missionary Church in Celina. A memorial service to honor Luke's life will follow with Pastor Shawn Harrison officiating. Because COVID is becoming more prevalent, masks are encouraged by the family during the gathering and service. The memorial service will be recorded and can be viewed following the services on the Cisco Funeral Home website, www.ciscofuneralhome.com or the funeral home’s Facebook page. Memorial contributions may be made to Lake Wales Care Center, www.lakewalescarecenter.com/donate/ or American Cancer Society. The family has entrusted Cisco Funeral Homes, Celina & St. Marys with the services. Please leave condolences to the family at www.ciscofuneralhome.com

Luke Springer, age 84, of Celina, passed away peacefully to be with his Savior, Jesus Christ on Sunday, August 29, 2021 at OSU Wexner Medical Center after a difficult battle with jaw cancer, covid and other complications. He had been married... View Obituary & Service Information

The family of Luke Springer created this Life Tributes page to make it easy to share your memories.

Luke Springer, age 84, of Celina, passed away peacefully to be...

Send flowers to the Springer family.