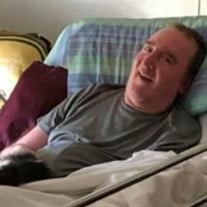 Luther “Joe” Fisher, age 58, of Celina, Ohio passed away peacefully on Tuesday, December 21, 2021 at his home. He was born December 10, 1963 in Celina, Ohio. He is survived by his mother, Martha (Linn) Fisher; his daughter, Ashley Fisher and grandson Owen, Arkansas; five sisters, Debby (Gary) Hamrick, Willshire, Pam (Ted) Krugh, Rockford, Vickie (Donald) Harvey, Rockford, Kim (Jack) Monroe, Bryant, Indiana and Twyla (Mark) Stephenson, Lake Forest, California; and twelve nieces and nephews. Joe was preceded in death by his father, James Fisher. He was a 1982 graduate of Parkway High School in Rockford. He worked for Meyers Plumbing in Chattanooga, Ohio and Elkhart Products Corporation in Geneva, Indiana. He was a member of Zion Lutheran Church in Rockford, Ohio. Before being stricken with MS at an early age Joe enjoyed hunting, fishing, biking, and playing football, basketball, and baseball. Joe was also an avid Cincinnati Reds fan. Anyone that grew up with Joe or knew him would agree that he was an exceptionally great son, husband, grandfather, brother, friend, co-worker, uncle and dad. He would do anything for anyone before he was sick with one of the worst diseases you can imagine. The joy and laughter he had given to so many while his health was deteriorating was truly overwhelming. Our hearts are saddened and will take time to heal. The thought of knowing we will all see him in heaven someday is very comforting. Private graveside service will be held at the convenience on the Fisher family. Memorial contributions can be made to Zion Lutheran Church, 9764 OH-49, Rockford, Ohio 45882. Cisco Funeral Homes of Celina & St. Mary’s are honored to care for Joe and his family. To pay respects and to leave online condolences or memories, visit www.ciscofuneralhome.com.

The family of Luther "Joe" Fisher created this Life Tributes page to make it easy to share your memories.

Send flowers to the Fisher family.