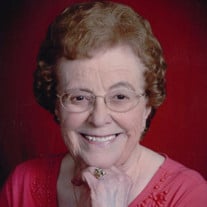 Margaret L. Fisher, age 99, of Celina, Ohio, passed away at Celina Manor on Friday, December 18, 2020 at 3:45 am. She was born on January 26, 1921 in Celina to the late Wilson G. and Florence L. (Luth) Meyer. On December 20, 1941 she married Donald E. Fisher and he preceded her in death in 2005. Survivors include her three children: Shirley (Danny) Williams of Rockford, Terry (Linda) Fisher of Celina and Steve (Mary Ann) Fisher of Celina; six grandchildren: Michelle (Scott) Tribolet of Rockford, Pam (Jeff) Henderson of Wilshire, Melissa (Michael) Kaup of New Knoxville, Kelli (Carl) Thomas of Coldwater, Jill Fisher of Celina, and Angie (Troy) Nissen of Northwood, Ohio; two step grandchildren, Megan (Josh) Beard, Sidney and Thomas (Lindsey) Minniear, Sidney; 12 great grandchildren; 2 step great grandchildren; and 1 great-great granddaughter. She is also preceded in death by a brother, Paul Meyer. Margaret was a 1939 graduate of Neptune High School and received the honor of salutatorian of her graduating class. She was a life member of St. John Hopewell Lutheran Church in Rockford. Margaret served as organist and choir director for 79 years and 11 months at the church. Besides playing the organ at church, she also played the organ during funerals for many years, providing music as comfort to many families. Margaret was a lady of great faith who loved her church, her family and music. Other interest included quilting, fishing, playing cards and in her later years, watching the Cincinnati Reds and Ohio State Buckeyes. Margaret was a devoted wife and mother; a fun-loving grandma and a lady who had many friends. She will be deeply missed by all of her family and friends. Due to the National Health Concerns of Covid-19 Margaret’s funeral service will be private. Burial will take place at Buck Cemetery, Celina. Memorials can be made to St. John Lutheran Church, Hopewell Township, 9009 State Route 118, Celina, Ohio 45822 and/or the donor’s favorite charity. Cisco Funeral Homes of Celina & St. Marys are honored to care for Margaret and her family. To pay respects and to leave online condolences or memories, visit www.ciscofuneralhome.com or Cisco Funeral Home Facebook page.

The family of Margaret L. Fisher created this Life Tributes page to make it easy to share your memories.

Send flowers to the Fisher family.