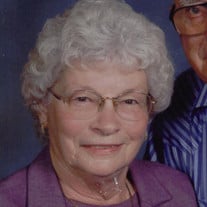 Martha May Andrews, age 82, of Rockford, Ohio & Chattanooga, Ohio passed away at 11:25PM on January 25, 2015 at Lutheran Hospital in Ft. Wayne, Indiana. She was born on July 5, 1932 in Pleasant Township in Van Wert County, Ohio to the late Michael... View Obituary & Service Information

The family of Martha May Andrews created this Life Tributes page to make it easy to share your memories.

Send flowers to the Andrews family.