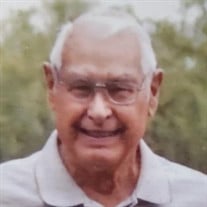 Melville D. Gehm, age 93, currently residing at Otterbein, St. Marys, passed away on Tuesday, November 24, 2020 at 12:45 pm. He was born June 27, 1927 in Rockford, Ohio to the late John and Icy (Canary) Gehm. He married Margaret Louise (Bienz) Gehm on September 4, 1948, and she preceded him in death on November 24, 2009. He is survived by a special friend, Marvel Lee Martin. Melville was a lifelong member of the Chattanooga Methodist Church. While living at Otterbein he attended the Wayne Street United Methodist Church in St. Marys, as well as the Otterbein Worship Center. He was a retired farmer and he retired from Goodyear Tire and Rubber Company in St. Marys after 30 years of employment. He was a volunteer with the Chattanooga Fire Department for 27 years. He was also a member of Shanes Masonic Lodge in Rockford, Ohio, the Scottish Rite of Dayton, the 32 Club, a former Shriner and member of The Shriner’s Hospital Unit. Melville also belonged to the Celina VFW Post #5713 and the Celina American Legion Post #210. Melville served in Japan as a medic with the 1st Calvary Division of the US Army, proudly serving his country. Melville is survived by his three daughters: Linda (Jerry) Duff of Vandalia, Ronda (Robert) Klosterman of St. Marys, and Carol Gehm of Punta Gorda, Belize. He also has two surviving grandchildren: Deanna (James) Griffiths of Aurora and Marcus (Mindy) Duff of Troy; seven great grandchildren, two step grandchildren, four step great grandchildren and six step great-great grandchildren; and a sister-in-law, Donna (Jim) Greene of Pensacola, Florida. He was a devoted husband and loved spending time with his grandchildren. Melville’s death was preceded by his wife, Margaret Louise (Bienz) Gehm, of sixty-two years, his brother, Melvin Gehm, and a grandson, Joshua Beougher. Due to the National Health Concerns of COVID -19, Melville’s funeral services will be private. Burial will follow at the UCC cemetery next to the church. In lieu of flowers, memorial contributions can be made Grand Lake Hospice, 1122 E Spring St, St. Marys, Ohio 45885. Cisco Funeral Homes of Celina & St. Marys are honored to care for Melville and his family. To pay respects and to leave online condolences or memories, visit www.ciscofuneralhome.com.

The family of Melville D. Gehm created this Life Tributes page to make it easy to share your memories.