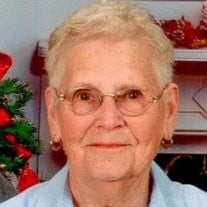 Norma Delores (Muether) Winemiller entered into eternal rest at 10 p.m. August 11, 2013 at her home in Neptune surrounded by her loving family. She was born September 29, 1934, in Celina, Ohio to George and Minnie (Gertz) Muether. On February... View Obituary & Service Information

The family of Norma Delores Winemiller created this Life Tributes page to make it easy to share your memories.

Send flowers to the Winemiller family.