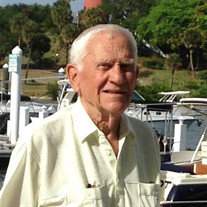 Robert L. Reineke, age 86, joined the Lord on August 4, 2018, at his home in St. Marys with his loving family by his side. He was born in St. Marys to the late Joseph and Margaret (Heckler) Reineke on October 7, 1931. On July 29, 1950, he married Martha Lee (Lynam) Reineke, who passed away on July 15, 1982, after 32 years of devoted marriage. On August 4, 1990, he married Lahoma (Binion) Reineke, who preceded him in death on December 21, 2012. Robert adored his loving family; he is survived by one daughter, Suzie (Nick) Dingledine of St. Marys. Robert also is a step-father to two step-sons: Keith (Carol) Thompson of Old Town FL. and James Thompson Jr., who preceded him in death. Not only was he loving with his immediate family, but that love and kindhearted spirits continued on through his entire extended family. Robert leaves behind seven siblings: Don (Margie) Reineke, Shirley Eshleman, Janet Reineke, Joe (Leila) Reineke, Jim (Bev) Reineke, Barb (Jim) Rohr, Charlie Reineke and was preceded in death by siblings, Gene Reineke and Mary Myers. Robert also has three grandchildren, three step-grandchildren, eight great grandchildren, one step greatgrandchild, who knew him as “great papa” and many, many nieces and nephews. Robert was a graduate of St. Marys Memorial High School and went on to work as a hydraulic engineer for Parker- Hannifin Corporation in St. Marys. Upon retirement, Robert insisted on staying busy and worked as a greens-keeper for Northmoor Golf Course. When Robert wasn’t busy working, he enjoyed visiting numerous golf courses in the area, had a true passion and love for wildlife and birds, and displayed his skillfulness in carpentry, which even included building his own home. Robert was an avid fisherman; he would travel with his family and friends a couple times a year, to not only spend time with the ones he loved, but to spend time doing something he truly enjoyed. Most importantly, Robert enjoyed spending time with his family. He will truly be missed by all. Robert was a member of Holy Rosary Catholic Church in St. Marys. He had a deep faith in the Lord which only grew stronger throughout his illness which brought him peace and comfort. Robert was also a member of St. Marys Moose Lodge #146, St. Marys Eagles Aerie 767, St. Marys Legion Post 323, and the St Marys VFW Post 9289. Robert‘s family would like to thank the nurses and staff at St. Marys Grand Lake Hospice for their special care they provided for him through his illness. Visitation hours will be held from 9:30 am – 10:30 am on Thursday, August 9, 2018, in Holy Rosary Catholic Church in St. Marys. Mass of Christian burial will be held at 10:30 am on Thursday, August 9, 2018, at Holy Rosary Catholic Church in St. Marys with Father Barry Stechschulte and Deacon Marty Brown officiating. Burial will follow at Gethsemane Cemetery, St. Marys. In lieu of flowers, memorial contributions can be made to Grand Lake Hospice, St. Marys. Condolences can be left at www.ciscofuneralhome.com Arrangements have been entrusted to Cisco Funeral Home, St. Marys & Celina.

The family of Robert L. Reineke created this Life Tributes page to make it easy to share your memories.

Send flowers to the Reineke family.