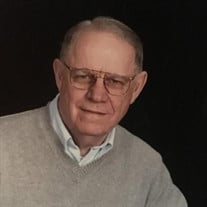 Robert Tanner, age 86, of St. Marys, passed away at his home on March 6, 2022, at 4:48 am, surrounded by his loving family. He was born September 3, 1935 in Joiner, Arkansas to the late Lonnie and Clara (Drake) Tanner. Robert was married to Martha (Anderson) Tanner on August 10,1963 and remained so until her death on October 2, 2016. He was married to Barbara (Faules) Tanner on May 1, 2018 and she survives at the residence in St. Marys. Other survivors include his children, Tim (Judy) Tanner, Plymouth, Minnesota, Andy (Donna) Tanner, Grafton, Ohio, Amy (Tim) LeeBurton, O’Fallon, IL, Jennifer (Scott) Snethkamp, St. Marys and Paul (Kim) Tanner, Strongsville, Ohio; 16 grandchildren; and 4 great grandchildren. Robert was also preceded in death by his three siblings, Junior Tanner, Argie Davis and Lloyd Tanner. Robert was a 1955 graduate of Caruthersville High School in Caruthersville, Missouri. He received his bachelor’s degree in business administration and economics from Arkansas State University in 1960. Robert served in the Arkansas National Guard following graduation for two years. He worked in accounting and finance during his professional life. Robert retired from Joint Township District Memorial Hospital in St. Marys in 1995 after working for 17 years in Finance. Robert was very active for many years in the Church of Christ serving in leadership roles as a deacon and elder and played a large role in starting the local Church of Christ in Wapakoneta, Ohio. Robert was an avid football fan with affinity towards the Ohio State Buckeyes and Chicago Bears (and later with Barbara, the Kansas City Chiefs). Robert also enjoyed staying active, running, walking, and spending time with his family. Visitation will be held on Friday, March 11, 2022, from 3:00 pm – 6:00 pm in the Cisco Funeral Home, 1175 East Greenville Road, St. Marys, Ohio 45885. Funeral services will begin at 10:00 am on Saturday, March 12, 2022 in the Church of Christ – Auglaize County, 15257 Blank Pike, Wapakoneta, Ohio 45895 with Minister Patrick Powers officiating. The family will receive friends from 9:00 am – 10:00 am prior to the service at the church. Memorial contributions can be made in Robert’s name to Sunset International Bible Institute, Deaf Ministry, 3723 34thStreet, Lubbock, Texas 79410. The Tanner family would like to thank all those who provided them with prayers and thoughtful wishes during this time. They appreciate your support. Cisco Funeral Homes of Celina & St. Marys are honored to care for Robert and his family. To pay respects and to leave online condolences or memories, visit www.ciscofuneralhome.com or Cisco Funeral Home Facebook page.

Robert Tanner, age 86, of St. Marys, passed away at his home on March 6, 2022, at 4:48 am, surrounded by his loving family. He was born September 3, 1935 in Joiner, Arkansas to the late Lonnie and Clara (Drake) Tanner. Robert was married to... View Obituary & Service Information

The family of Robert Tanner created this Life Tributes page to make it easy to share your memories.

Send flowers to the Tanner family.