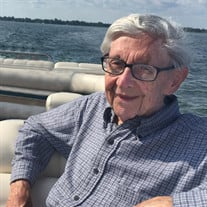 Roger E. Bechdolt, 93, formerly of Celina, passed away at Otterbein, St. Marys, on December 11, 2019 at 8:30 pm. He was born on December 19, 1925 in Highland Park, Michigan, to Jesse and Etha (Deitsch) Bechdolt; both preceded him in death. He married his truelove Evelyn Stelzer on April 21, 1951. She passed away in November, 2015. He was dedicated to, and delighted in, his many family members. His survivors include a daughter, Sharon Bechdolt (John Okonek), Glenview, IL; sisters-in-law Alice Dirksen, Celina, Kate Hedrick, Coldwater and Bonnie Stelzer, Mason, OH; brothers-in-law, Bob (Eileen) Stelzer, Coldwater, Tom Stelzer, Celina, Ken Stelzer, Olathe, KS, and Ralph (Nicki) Stelzer, Celina; beloved family, Susan (Tom) Kirk, Celina, Jessi Poppe, Celina, April (Tom) Payne, Cincinnati, and Amy (Neil) Peacock, Citrus Hts, CA; and many other nieces and nephews that were very dear to him. He was preceded in death by his beloved sister, Mary Louise Poppe; brothers-in-law, Arnold “Bozo” Stelzer; Al Dirksen, Tom Hedrick, and Virgil Poppe; and two sisters-in-law, Judy Stelzer and Pat Stelzer. Roger was graduate of Celina High School, and Miami Jacobs Business College in Dayton. He was very proud to have served in the US Navy as a young man and was in the Pacific during World War II assigned to the USS Dutchess, an attack transport ship. For many years, he ran Bechdolt & Son Western Auto Store on Fayette Street in Celina with his mother, Etha. The store was locally famous for being the source of many of the toys that Santa delivered on Christmas Eve. When they closed the store in 1960 after some 24 years in business, Roger sold mutual funds and then went to a career at the First National Bank, where he worked for many years. Later, he sold real estate before retiring for travel, time with family and winters in Melbourne Beach, Florida. Roger was a lifelong member of St. John’s Lutheran Church. He was a member of several service clubs, notably Sertoma, the Masonic Lodge and the Elks. He was a loving and dedicated husband, father, brother, uncle, great uncle and great-great uncle. He loved spending time with family and friends, particularly days spent boating on the lake and or playing cards. For many years, Roger enjoyed spending winters in Florida in a beautiful spot between the Indian River and the Atlantic Ocean, with his friends and beloved wife, Evelyn. We will miss his cheerful optimism, kind nature and his sweet smile. Visitation hours will be from 1-4 pm on Sunday, December 15, 2019, at Cisco Funeral Home, Celina, immediately followed by a service and a celebration of his life at the funeral home with Pastor Jeff Gramza of St. John’s Lutheran Church presiding. Burial will be private at Swamp College Cemetery on Monday morning. Contributions can be made to St. John’s Lutheran Church and/or Grand Lake Hospice. Please leave a condolence to the family @ www.ciscofuneralhome.com

The family of Roger E. Bechdolt created this Life Tributes page to make it easy to share your memories.

Roger E. Bechdolt, 93, formerly of Celina, passed away at Otterbein,...

Send flowers to the Bechdolt family.