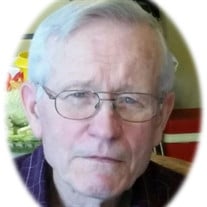 Roger J. Knapke, age 84, of Chickasaw, OH, passed away at Celina Manor, on Sunday, April 30, 2017, at 8:55 pm. He was born September 23, 1932, in Maria Stein, OH to the late Frank and Regina (Eyink) Knapke. He married Cathryn May on August 18, 1956, and she survives at the residence in Chickasaw. Other survivors include two daughters, Marlene (Mark) Abels, Coldwater, and Dorothy (Douglas) Perry, Dayton; a brother, Gilbert (Judy) Knapke, Chickasaw; a brother-in-law, Lewis (Alma) May, Versailles; two sisters-in-law, Alma (Fred) Broerman, Versailles, and Gloria May, Dayton; three grandchildren, Brian (Alanna) Abels, Kevin (Madeleine) Abels, and Austin (Erin Uppenkamp) Abels; and one great grandson. Also preceded in death by three sisters, Angela (Norbert) Prenger, Eileen (John) Fleck, and Floriana (Walter) Fleck; and a brother-in-law, Arthur May. Roger served his country in the United States Army during the Korean War era. He retired from Dairy Farm Products in New Bremen after 45 years of service. He was a member of Precious Blood Catholic Church, Chickasaw. Mass of Christian Burial will be held at 10:30 am on Thursday, May 4, 2017, at Precious Blood Catholic Church, Chickasaw. Burial will follow in Precious Blood Cemetery. Friends may call at the Cisco Funeral Home, Celina from 4-7 on Wednesday, May 3, 2017, and from 9-10 am on Thursday, May 4, 2017. Memorial Contributions may be made to C.A.L.L. Food Pantry, 420 N. Brandon Ave., Celina. Condolences can be left at www.ciscofuneralhome.com

The family of Roger J. Knapke created this Life Tributes page to make it easy to share your memories.

Send flowers to the Knapke family.