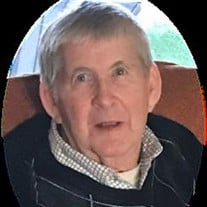 Ronald A. Green, age 70, of Celina, Ohio, passed away on January 19, 2018, at 7:15 am, in Otterbein St. Marys Retirement Community. He was born August 27, 1947 in Celina to the late Allen and Fern (Zigler) Green. On January 1, 1996 he married Deb (Wilson) Green, and she survives at the residence in Celina. Other survivors include a son, Rob (Melissa) Smalley, Celina; a daughter, Kelli (Matt) Jones, Celina; a sister, Barbara (Jack) Quilling, Celina; and five grandchildren, Payton, Caden, and Karsyn Smalley, Jaden and Landen Jones. Ron was a 1965 graduate of Celina Senior High School. He served his country in the United States Army during the Vietnam War era. He retired from Good Year Tire and Rubber, St. Marys, after 42 years of service. After retiring he went on to work as a courier for First Financial Bank in Celina. He attended Bethany United Methodist Church in Celina, and was a life member of Celina VFW Post #5713. He enjoyed fishing, hunting, OSU Football, the Cleveland Browns, and watching Celina Bulldog sports. He also loved spending time with his family and friends and will be deeply missed by them all. A celebration of Ron’s life will begin at 4:00 pm on Tuesday, January 23, 2018 at Cisco Funeral Home Celina, with Rev. Jon Exman officiating; where the family will receive friends from 2:00 pm – 4:00 pm prior to the services. Military honors by Celina VFW Post #5713 and Celina American Legion Post #210 will be conducted at the conclusion of Ron’s services. Private graveside services will be held at the convenience of the Green family. Memorial contributions can be made to Bethany United Methodist Church, Celina. Please leave condolences to the family at www.ciscofuneralhome.com

The family of Ronald A. Green created this Life Tributes page to make it easy to share your memories.

Send flowers to the Green family.