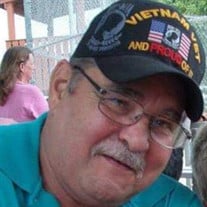 Ronald “Ron” W. Miller, age 72, of Celina, passed away on February 10, 2022 at 12:57 pm at Lutheran Downtown Hospital in Fort Wayne, Indiana. He was born on October 28, 1949 in Celina to the late Don and Betty (Archer) Miller. On October 16, 2009 he married Deborah A. (Muether) Miller and she survives in Celina. Ron is also survived by two daughters, Lisa (Scott) Cluckey, Celina and Nicole (Doug) Ritchie, Celina; a brother, Gary (Sylvia) Miller, Englewood, Ohio; and six grandchildren, Cody, Sydney, Alex, Jeri, Haley and Emily. Ron was a 1967 graduate of Mendon-Union High School. He proudly served his country in the United States Air Force, where he served two tours of duty in Vietnam. He has worked for the past 30 at the Celina American Legion. He was a member of Celina Moose and Celina Eagles Aerie #1291 and a life member of Celina VFW Post #5713 and Celina American Legion Post # 210, where he served as a past commander. Ron enjoyed gambling, playing cornhole, grilling, watching racing and most of all spending time with his family and friends. A gathering of family and friends will take place on Tuesday, February 15, 2022 from 2:00 pm – 7:00 pm at Cisco Funeral Home in Celina. Funeral services will be held on Wednesday, February 16, 2022 at 10:30 am at Cisco Funeral Home in Celina with Rev. Jeff Gramza officiating; where the family will receive friends from 9:30 am – 10:30 am before the service. Burial will follow at Mercer Memory Gardens in Celina with military rites to be conducted by Celina American Legion Post #210 and VFW Post #5713. Memorial contributions can be made to Wounded Warrior Project. Cisco Funeral Homes of Celina & St. Marys are honored to care for Ron and his family. To pay respects and to leave online condolences or memories, visit www.ciscofuneralhome.com or Cisco Funeral Home Facebook page.

The family of Ronald "Ron" W. Miller created this Life Tributes page to make it easy to share your memories.

Send flowers to the Miller family.