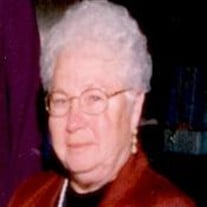 Rosemary Householder, 88, St. Marys, OH, passed away on April 4, 2015 at 1:00 A.M. She was born at home on August 19, 1926 in Piqua, OH to the late Alfred and Wilhelmina (Frigge) Peltier. She married Kenneth Householder on August 13, 1946 and he preceded her in death on December 22, 1988. Survivors include three sons, Ronn (Vicky) Householder, Gahanna, OH, Terry (Susan) Householder, Anna, OH and Tom Householder, St. Marys, OH; a daughter-in-law, Judy Householder, Bellefontaine, OH; a brother, Ray (Hazel) Peltier, Piqua, OH; two sisters, Charlene Olds, Piqua, OH and Rita Miller, Sidney, OH; 15 grandchildren and 23 great grandchildren. Also preceded in death by a son, Mike Householder; three brothers, Clete, Paul and Dick Peltier; and a sister, Dorothy Kroger. Rosemary was a 1944 graduate of Piqua Catholic High School. She was a member of Holy Rosary Catholic Church in St. Marys. She was also a member of the Altar Society. She worked at the Decker Meat Packing Plant in Piqua as a secretary. She later worked for Mc Kirnan Brothers in Celina as a bookkeeper, although most of her life was devoted to raising her family. In 1968, Rosemary and her husband, Ken, built, managed, and owned their own business know as Ken’s Campgrounds. They later sold their business and lived north of St. Marys. After retiring they sold their home and traveled the country for two years in their Air Stream trailer. They finally settled down in a small home in St. Marys. Rosemary’s husband died two years later, after his passing she lived there for 26 years commuting to Florida in the winters. Rosemary enjoyed her many friends and family. She especially liked being on the go, never missing an opportunity to play scrabble, cards, or bingo. She had a positive outlook on life and she will be missed by the many friends and family that she loved. Visitation hours will be from 3 PM to 7 PM on Wednesday, April 8, 2015 in the Cisco Funeral Home of St. Marys, a prayer service will follow at 7 PM. The family will also receive friends from 9:45 AM to 10:45 AM on Thursday in the funeral home. Mass of Christian burial will begin at 11:00 AM on Thursday in the Holy Rosary Catholic Church, St. Marys with Fr. Barry Stechschulte, officiating. Burial will follow at St. Marys Catholic Cemetery, Celina, OH. Contributions can be made to Holy Rosary Catholic Church, St. Marys. Please leave a condolence to the family @ www.ciscofuneralhome.com

The family of Rosemary Householder created this Life Tributes page to make it easy to share your memories.

Send flowers to the Householder family.