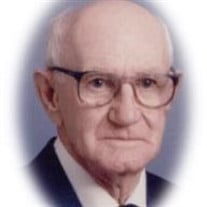 Ross “Jake” Webb, age 100, of Mendon, OH, passed away on Wednesday, March 1, 2017 at 11:30 pm at The Laurels of Shane Hill, Rockford, OH. He was born April 23, 1916 in Mendon to the late Tony and Ada (Lamonde) Webb. On February 3, 1943 he married Virginia Simpson, they were together for 72 wonderful years; she preceded him in death on October 9, 2015. Other survivors include two sons, Daniel (Lillie) Webb, Mendon, and Gary Webb, Mendon; a daughter, Rox Ann (Michael) Ringer, Coldwater, MI; two sisters, Eileen Brown, Mendon, and Maxine Chamberlain, Sandusky, OH; seven grandchildren, seven great grandchildren, and two great great grandchildren. Also preceded in death by two brothers, Orville Webb and Tony Webb Jr.; and four sisters, Thelma Zizelman, Nadine Klingler, Doris Rumler, and Wilma Webb. Jake was a 1938 graduate of Mendon High School, Mendon, OH. He retired after working his entire life as a farmer. His family meant the world to him, especially his grandchildren and he will be deeply missed by all. Funeral services will begin at 2:00 pm on Saturday, March 4, 2017 in the Cisco Funeral Home, Celina, with Rev. Jon Exman officiating; the family will receive friends from noon – 2:00 pm prior to the service at the funeral home. Burial will follow at Mendon Cemetery, Mendon, OH. Contributions can be made to State of the Heart Hospice, 230 W. Main St., Coldwater, OH 45828. Please leave a condolence to the family @ www.ciscofuneralhome.com

The family of Ross "Jake" Webb created this Life Tributes page to make it easy to share your memories.

Send flowers to the Webb family.