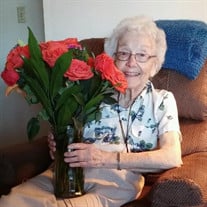 Ruth Imogene Cooper, 90, St. Marys, Ohio, died at 3:30 pm May 2, 2016, at her residence in St. Marys. She was born November 18, 1925 in Mercer County to Carey and Lexie (Mihm) Boroff, both preceded her in death. She married Harmon Boysell September 19, 1948, and he preceded her in death on February 10, 1982. She than married Charles W. Cooper, and he precede her in death on July 21, 2002. She is survived by one daughter, Cherie Bellamy, Wapakoneta; two sons, Douglas (Linda) Boysell, Dennis (Brenda) Boysell both of St. Marys; one stepdaughter, Gloria (Chris) Keller, St. Marys; four stepsons, Charles (Judy) Cooper, James (Lynda) Cooper, John (Mary) Cooper all of St. Marys, Gary (Janet) Cooper, Pedro, Ohio; a sister, Lois Roettger, St. Marys; a brother, Laverl Boroff, St. Marys; seven grandchildren, 9 great grandchildren; and many step grandchildren and great step grandchildren. Preceded in death five brothers, Dale, Forrest, Willard, Lavon, and Marlin Lynn Boroff; four sisters, Retha Stewart, Beulah Heppeard, Sylvia Pond, and Betty Sutton; a brother-in-law, Orin Roettger; and a son-in-law, James Bellamy. She graduated from Rockford High School in 1944 and worked in the accounting department at Goodyear from 1945 to 1949. She was a member of the First Church of God at St. Marys and one of the founders of the church. She was a member of the W.O.C.G and served in the past as spiritual life director and later as the missionary education director. She was an adult Sunday school teacher and taught all ages in the past. She also had served on the Board of Trustees of the church. Visitation hours will be from 2-4 pm and 6-8 pm, Thursday, May 5, 2016 in the Cisco Funeral Home, St. Marys. Funeral services will begin at 10:30 am on Friday, May 6, 2016 in the Cisco Funeral Home, St. Marys with Pastor Keith Paff officiating; where the family will receive friends 9:30 am – 10:30 am prior to the service at the funeral home. Burial will follow at Elm Grove Cemetery, St. Marys. Memorial contributions may be directed to First Church of God, St. Marys.

Ruth Imogene Cooper, 90, St. Marys, Ohio, died at 3:30 pm May 2, 2016, at her residence in St. Marys. She was born November 18, 1925 in Mercer County to Carey and Lexie (Mihm) Boroff, both preceded her in death. She married Harmon Boysell... View Obituary & Service Information

The family of Ruth Imogene Cooper created this Life Tributes page to make it easy to share your memories.

Send flowers to the Cooper family.