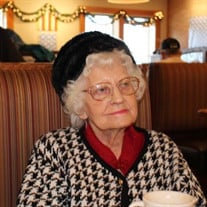 Ruth Joan “Garman” Pond Reinhart, 85, of Celina, passed away at St. Rita’s Medical Center Inpatient Hospice, Lima, OH on October 6, 2016. She was born January 29, 1931 in Celina, OH, to Steven and Mabel (May) Garman; both preceded her in death. Survivors include her children, Carl E. (Donna) Pond, Rockford, OH, Rebecca S. (Matthew) Pierce, Troy, OH, and Pamela P. (Dr. Craig) Miesse, Celina, OH; a step son Rick Reinhart; 7 grandchildren and 15 great grandchildren; and many nieces and nephews. Ruth was also preceded in death by her first husband, H. Wayne Pond on July 7, 1965 and second her husband, Virgil F. Reinhart on September 22, 1987; five brothers, Lee, Ed, George, John, and Jim Garman. She was a 1949 graduate of Celina Senior High School. She worked in the cafeteria at West Elementary and was also Clerk of Courts both in Celina. She went on to work as a secretary for Celina Senior High School and finally retired from retail sales from Brooks Clothing and Niblicks, both in Decatur, IN. She was a member of St. Paul’s United Methodist Church in Celina, Church of God in Decatur, IN and most recently attended Celina Baptist Temple. She was also a member of the Celina American Legion Auxiliary Post 210. Ruth loved her family and worked hard raising her three children by herself. She was an avid sports fan and enjoyed watching the Ohio State Buckeye’s and the Cincinnati Reds. She also loved to bake and play the piano. She was a devoted wife, mother and grandmother and will be deeply missed by all. Visitation hours will be from 2 – 6 pm, Sunday, October 9, 2016 in the Cisco Funeral Home, Celina. Funeral services will begin at 10:30 am on Monday in the Cisco Funeral Home with Rev. Steve Clayton officiating; where the family will receive friends one hour prior to the service. Burial will follow at Swamp College Cemetery, Celina, OH. Contributions can be made to St. Jude Children’s Research Hospital and / or Wounded Warrior Project.

The family of Ruth Joan Pond Reinhart created this Life Tributes page to make it easy to share your memories.