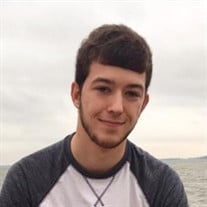 Seth Robert Bremer, age 19, of Celina, Ohio, passed away on Tuesday, November 28, 2017 at Miami Valley Hospital in Dayton, Ohio, due to injuries sustained in a car accident. He was born September 14, 1998 in Dayton. He is survived by his mother, Hope Leane Stineback, Celina, his father, Eric Robert Bremer, Dayton, a sister, Kiara Bremer, Celina; two brothers, Braylon Stineback, Celina, and Logan Bremer, Dayton; maternal grandparents, Rhonda (Steve) Wade, Lebanon, Ohio, and Jeff (Sam) McDonald, Florida; paternal grandparents, Dinah (Robert) Bremer, Dayton; maternal great grandparents, Ron (Karen) Erisman, Dayton; maternal great great grandmother, Grace Erisman, Dayton; aunts and uncles, Scott (Allison) McDonald, Hamilton, Ohio, Marla Bremer, Erin Bremer, and Nicole Harlo, all of Dayton, and Amber Siddall, Florida. He was also survived by his girlfriend Lesley Turner, St. Marys, and numerous cousins. Preceded in death by his uncle Phillip Bremer. He was 2017 graduate of Celina Senior High School. He worked for Continental in St. Marys, Ohio. He enjoyed high school wrestling, riding his dirt bike and motorcycle, mudding and most of all driving his “tee-ruck.” He was also a very avid Bengals and OSU football fan. Seth was a very spiritual person, and he strongly believed if you have family you have everything. He knew no strangers; everyone was a friend. Seth’s loving and generous spirit continues to touch lives. It was his desire that when he passed on, if he could help improve or even save someone's life by organ donation, we would honor and respect his wishes. Funeral services will begin at 2:30 pm on Monday, December 4, 2017 in Cisco Funeral Home, Celina with Rev. Matt Overman officiating; the family will receive friends from 11:00 am – 2:30 pm prior to the funeral on Monday. Burial will follow at North Grove Cemetery, Celina, OH. Memorial contributions can be made to C.A.L.L. Food Pantry, Celina, Ohio. Please leave a condolence to the family @ www.ciscofuneralhome.com

Seth Robert Bremer, age 19, of Celina, Ohio, passed away on Tuesday, November 28, 2017 at Miami Valley Hospital in Dayton, Ohio, due to injuries sustained in a car accident. He was born September 14, 1998 in Dayton. He is survived by his mother,... View Obituary & Service Information

The family of Seth Robert Bremer created this Life Tributes page to make it easy to share your memories.

Send flowers to the Bremer family.